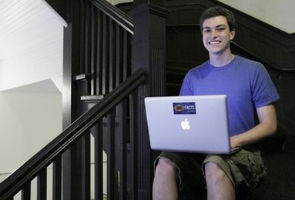 Highlights
When Adorian Deck was home sick from high school, he entertained himself like countless other teenagers have in recent years: He started a Twitter account.

Unlike other teenagers, Deck's account became a sensation. Deck, under the handle (at)OMGFacts, tweeted random bits of celebrity gossip and quirky trivia. In less than a year, he had attracted more than 300,000 followers.

Now Deck, 17, is suing a business partner who promised to take OMG Facts to the next level, but who the Northern California teen says deceived him into turning over the rights to his creation.

"It was kind of a slow process of realizing what exactly was going on," Deck said. "I was starting to lose more and more control."

A federal lawsuit over rights to a Twitter feed might sound like a case of bringing a grenade launcher to a squirrel hunt. But the court fight over OMG Facts reminds that the power of a tweet can extend well beyond 140 characters.

For both sides, the dispute is not so much over who can claim any of the more than 5,500 tweets to the (at)OMGFacts account as who owns the rights to the potentially lucrative OMG Facts brand.

Emerson Spartz, 24, the defendant in the case, declined to comment on the ownership issue directly because of the pending litigation. But he says OMG Facts would have nowhere near its current popularity without his efforts.

Spartz first caught the media's attention as the founder of mugglenet.com, one of the world's most popular Harry Potter fan sites, which he started when he was 12. He went on to start Spartz Inc., an Internet media company that oversees a network of sites aimed at a young audience.

Spartz says that since partnering with Deck in February 2010, Spartz Inc. built a popular OMG Facts website, developed a heavily subscribed YouTube channel and researched and wrote nearly every tweet on (at)OMGFacts.

"Mr. Deck has hardly lifted a finger throughout most of the growth of OMG Facts, but people have been telling him he's a genius for so long now that he's starting to believe it," Spartz said.

Deck disputes that he stopped tweeting. Undisputed is the ongoing surge in (at)OMGFacts' popularity.

Since Spartz got involved, (at)OMGFacts grew from fewer than 400,000 followers to nearly 1.9 million followers, making the feed the 126th most followed account out of more than 200 million Twitter users, according to Twitter statistics website twittercounter.com. The (at)OMGFacts feed ranks just below musician and would-be Haitian presidential candidate Wyclef Jean and just above actor Peter Facinelli, who appeared in the Twilight movies.

A large number of Twitter followers can feed not just egos but bank accounts. Top tweeters like Kim Kardashian (7.4 million followers) can command $10,000 per tweet to endorse a product.

Regulators have recognized a tweet's power. The Federal Trade Commission requires bloggers, including Twitter users, to disclose when they are being paid to endorse products.

Mixing tweets, money and the law can raise other complex issues. When rapper 50 Cent (4.5 million followers) in January posted praise of a penny stock in which he was an investor, shares of H & H Imports Inc. skyrocketed. The hot tip led to speculation that the Securities and Exchange Commission might investigate, though no such probe was ever confirmed.

In Chicago, a property management company filed a libel lawsuit against a tenant who complained on Twitter about a roof leak that led to mold in her apartment. A judge dismissed the suit last year.

Along with the potential of Twitter's outsize influence to lead to legal entanglements, the OMG Facts case highlights the tricky question of who can claim to own a tweet.

Because tweets are so short, it can be hard to compose them in a way that earns them full copyright protection, said Eric Goldman, a professor of Internet and intellectual property law at Santa Clara Law School.

"Copyright protects the ways in which we express ourselves," Goldman said. "It doesn't protect the underlying facts or ideas we are expressing."

What's more, Twitter by its very nature, which includes a button to "retweet" or repost another user's tweet to your own feed, may imply a right to reuse someone else's material.

The law gets murkier when talking about a collection of tweets, or the brand identity itself, as in the case of the OMG Facts lawsuit.

Deck's complaint contends that the contract he signed with Spartz was predatory and designed to dupe the teen into turning over his rights to the OMG Facts trademark without realizing what he was doing. Deck's attorney, Glenn Peterson of Roseville, argues that the intellectual property issues are moot in any case because California law allows individuals to disavow any contracts signed when they were minors.

Spartz counters that Deck's mother co-signed the contract as his legal guardian, and that Deck is simply hoping to exploit Spartz Inc.'s hard work for a quick gain.

"Among other things, this agreement was designed to protect against Mr. Deck walking away with what we created, which is exactly what he's trying to do," Spartz said.

Perhaps the only clear fact is that the law is still racing to evolve at the blistering pace of social media.