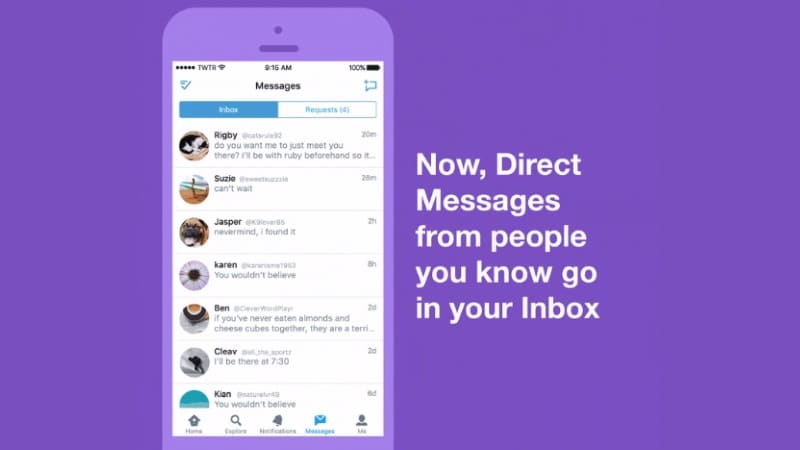 Twitter has added a new feature to Direct Messages (DMs) that will now filter DMs from people not followed by users.

DMs from people you do not follow will be contained in "Requests" in the new Messages tab inbox in Twitter on iOS, Android and will soon be available on Twitter.com.

"The new DM review inbox function works for anyone who's turned on the setting that allows receipt of messages from people they don't follow and will let you choose to either 'Delete' or 'Accept' inbound messages," TechCrunch.com reported on Tuesday.

The sender will not know whether or not receiver has seen their message until you hit accept.

Last week, Twitter launched a customisable Direct Message Card that businesses can use to promote and share bots and other customer experiences in DMs.

With this new card, Twitter aims at helping businesses drive discovery of such experiences - both through Promoted Tweets and organic sharing.

Earlier this week, in another attempt to reposition itself as a major video provider, Twitter has linked up with the BBC to share coverage of five major UK elections debates from Wednesday.

According to a report in the BBC, the first event to be broadcast is the BBC Election Debate and will provide an important platform for politicians from six of the UK's major parties.

"The micro-blogging site will also stream the Newsbeat Youth Debate on June 6 and conclude its coverage with the live Election Night Results Special on June 8," the report said.

According to the BBC, its "trial interactive experience" will deliver curated real-time tweets from the BBC experts alongside live video.