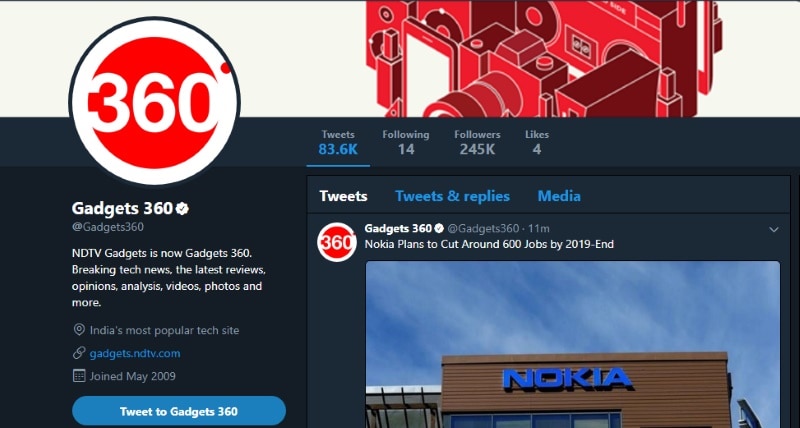 Already available on Android and iOS apps, Twitter has now rolled out its dark-toned Night Mode interface theme to desktop users that will help users monitor key real-time information without straining the eyes.

"You can now enable night mode on twitter.com! Also available on Twitter for iOS and Android," a post on the microblogging website said on Wednesday. The Night Mode look is dark navy colour and not black or gray, which is considered as a better choice for general legibility.

Users can enable it by clicking on their profile picture on the top right corner of the Twitter Web interface and tapping the Night mode toggle with a crescent moon symbol at the bottom of the menu.

Twitter added zero users since first quarter, posting $574 million (roughly Rs. 3,676 crores) in revenue in the second quarter this year which is a decrease of five percent YoY (year-on-year). Last quarter, the micro-blogging platform had daily active usage growth of 14 percent YoY. Twitter now has 328 million monthly active users (MAUs) - the same number it reported in the first quarter of 2017.

Last month, the Twitter app for Xbox One has received an update and the application now allows users to see their own timeline while watching videos. Earlier users could see the top comments about a particular video while watching it, with "Multi-timeline viewing" feature, users will be able to see their timeline as well as a wide range of commentary from a variety of accounts, as per the update log.