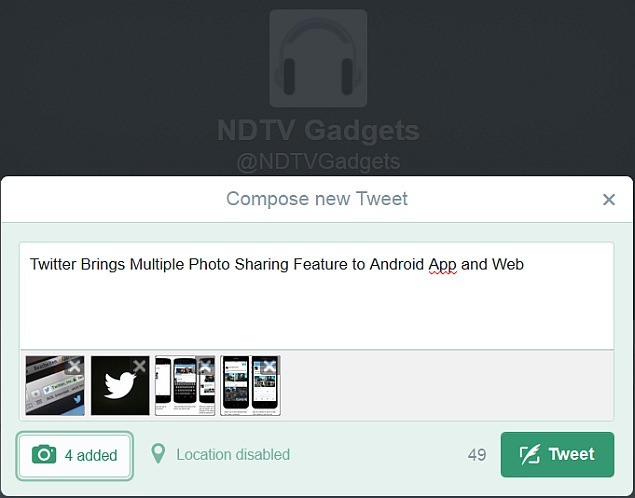 Twitter on Tuesday announced it had rolled out the feature of allowing users to share multiple photos in a tweet via its Web interface and the Android app (above image shows). The feature will allow users to share up to four photos in a single tweet which will be stitched together into a collage.

The micro-blogging giant announced the news via its @twittermobile handle, with the tweet reading, "Android & http://twitter.com users: we're rolling out the ability to share multiple photos in a Tweet."

The new multiple photo sharing feature has been detailed on the Twitter blog, with the same post as when the company had announced the feature for iOS in March. Twitter had then mentioned that the feature was 'coming soon' to the Android and the Web interface, whilst adding the photo-tagging feature for all three platforms.

Once users share multiple (up to four) photos in a tweet, a collage is automatically created. The updated Twitter app for Android is already available on Google Play in India.

In addition to that there is more in the offing. Tweetdeck.com on its official Twitter handle wrote that Emoji support (brought to the Web by Twitter in April) will now be available for the Chrome extensions and the Windows app.

In April, Twitter reported lacklustre user and usage growth for the second consecutive quarter, deepening investor concerns about its struggle to gain a mass following. Perhaps most worrying, the San Francisco-based company said its 255 million monthly users, on average, appeared to check the service less frequently than a year ago.