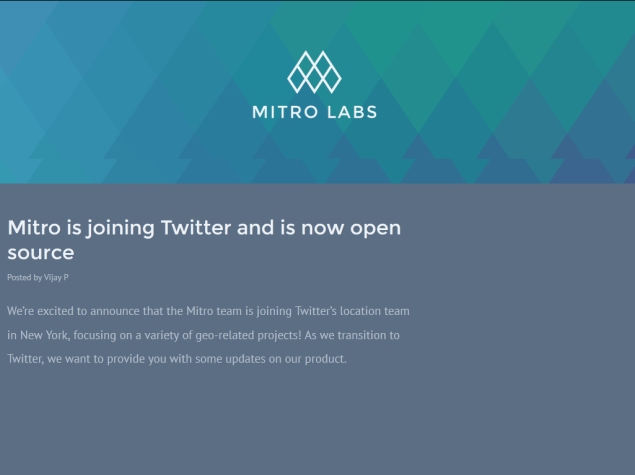 Twitter has acquired a password security startup named Mitro Labs. The announcement was made on Thursday along with the password manager product's transition to the open-source platform.

"We're excited to announce that the Mitro team is joining Twitter's location team in New York, focusing on a variety of geo-related projects!," said Mitro on its website, and tweeted the same message.

While there is no official announcement made by Twitter as yet on the financial details of the deal, the Twitter Engineering team did reply to the tweet with writing "Welcome to the flock" on the announcement tweet posted by Mitro.

Welcome to the flock, @mitroco!

Mitro Labs is best known as the developer of a password manager that operates as a Web browser extension. It is designed for people to share or control passwords from one account. The company was founded in 2012 by former Google engineer Adam Hilss, and had been backed by Google Ventures and Matrix Partners.

On the announcement page, the company said that its product will now become an open-source, community-run project with assistance from the Electronic Frontier Foundation that it hopes will continue efforts, while the Mitro team itself will join Twitter.

"As of today, we are releasing all of Mitro's server and client code under the GPL license on Github. We've been working hard to build a secure, easy-to-use password manager for individuals and groups," added Mitro.

Last month, Twitter had announced its plans for acquiring Namo Media, a technology firm specialising in "native advertising" for mobile devices, as well as SnappyTV, a service which enables the clipping, editing and sharing of video files over a messaging platform.
Comments