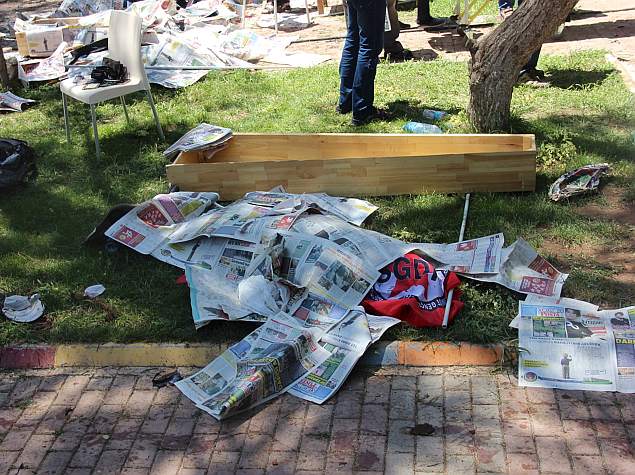 Turkey briefly blocked access to Twitter on Wednesday to prevent images of Monday's deadly bombing from being broadcast and to stop Twitter users from calling for protests against the government, which they blamed for not doing enough to prevent the attack, the state-run Anadolu Agency reported.

The dispute highlighted the tensions in Turkey after the suicide bombing Monday in the southeastern border city of Suruc, which killed 32 people and wounded scores. Turkish officials say the Suruc bombing is part of a retaliation campaign by the Islamic State group for the government's crackdown on its operations in Turkey.

Access to Twitter in Turkey was restored a few hours later Wednesday. A government official said Turkey had asked Twitter to remove 107 URLs with images of the bombing's aftermath. Twitter had removed about 50 of the URLs before it was blocked.

A Turkish government official said access to Twitter was restored after the company "removed malicious content, including hate speech, in line with the court order." The official spoke on condition of anonymity because of rules that bar officials from speaking to journalists without authorization.

A court in Suruc issued a ban earlier Wednesday on the publication of images related to the bombing in the media, including on the Internet and on social media platforms, and ruled that access be barred to Internet sites not complying with the ban, Anadolu reported.

Authorities confirmed, meanwhile, that Monday's attack was a suicide bombing and identified the bomber as Seyh Abdurrahman Alagoz, a 20-year-old Turkish national who was confirmed through DNA testing.

Anadolu said Alagoz' older brother ran a now-closed down tea house where IS was believed to have recruited followers. The location of the tea house was not disclosed. The two brothers had disappeared six months ago and had been reported as missing two months ago by their family, which lives in Adiyaman, the province north of where Suruc is located.

Anadolu said the two were wanted by authorities as "missing persons with possible terrorism traits."

Also Wednesday, a pro-Kurdish news agency said Kurdish militants have claimed an attack on two policemen who were found dead in their home in the town of Ceylanpinar, near the border with Syria, with gunshots in their heads. The Firat news agency said the attack was carried out in retaliation to the Suruc bombing to "punish" the policemen it claimed had collaborated with "IS gangs."

Turkish officials say they have detained more than 500 people suspected of working with IS in the last six months - including an investigation of IS recruitment networks in Turkey that this month netted 21 suspects.

Protests have erupted in Istanbul and other cities since the bombing Monday, with demonstrators blaming the government for the attack in city close to the border with Syria. On Tuesday, police detained some people before they could march to a local ruling party office in Istanbul. Protesters also threw fireworks as police officers attempted to disperse a crowd at a separate protest in Istanbul.

Turkey has periodically blocked social media. The government ordered a temporary block on Twitter and YouTube earlier this year during a hostage crisis in an Istanbul courthouse. Those sites were also blocked last year after audio recordings of a secret Turkish security meeting that suggested corruption by government officials were leaked on social media. Turkey's highest court, however, overturned those bans, deeming them to be unconstitutional.