The Other Zuckerberg aspires to a talk show and Broadway 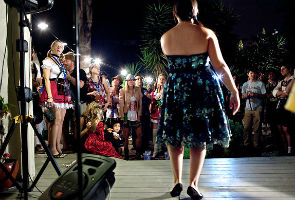 It was nearly midnight on a rainy Wednesday in September, and more than a dozen friends gathered by Ms. Zuckerberg, the older sister of Mark Zuckerberg, a founder of Facebook, were crowding a private room at the Midtown karaoke club Japas 38.

"Yay!" cheered the crowd as their host hoisted a carafe of tequila in the air and circled the tables, pouring shots. The air smelled of stale beer and soy sauce. After salt was licked, plastic cups drained and limes squeezed, she grabbed a microphone and belted out a rousing version of "I Will Survive."

In August, Ms. Zuckerberg, 29, quit her job at Facebook, where she had been among the first two dozen people hired. Most recently, she was the director of marketing. In its early days, Ms. Zuckerberg was a buoyant presence, representing her reticent brother to an eager press. Later, she earned attention (not always favorable) singing at company functions with a band composed of colleagues. And she came up with the idea for Facebook Live, the social network's video channel, which has featured interviews conducted by Facebook executives with Oprah Winfrey and President Obama.

Now Ms. Zuckerberg has started her own business, R to Z Media, to help companies take advantage of social media.

"This is the launch party of Randi Zuckerberg!" she said at the club, beaming.

Ms. Zuckerberg, who lives in a rented house in Palo Alto, Calif., has ambitions beyond the Internet. "I want a talk show," she said two days earlier over drinks at the Mercer Hotel. She also wants to sing on Broadway. And she is interested in philanthropy: while in New York, she conducted live online interviews with participants of the Clinton Global Initiative and worked the red carpet at a United Nations gala.

Older women who are mentors, Ms. Zuckerberg said, have warned her that she must tone down her flamboyant persona, but she refuses to take heed. "This is a new world we live in, and it should be possible for a woman to be taken seriously and still do what she loves," she said.

Three weeks after the karaoke night, she spoke at a conference sponsored by the New York Stock Exchange. She then traveled to Warsaw to talk to 2,000 telecom and media executives about social media. And the estate of Michael Jackson hired her to be the host of an online show on the pop star's Facebook page.

"Every article written about me now refers to me as Randi Zuckerberg, Mark's sister," she said. "Maybe one day that won't be what people say about me."

MS. ZUCKERBERG was born in 1982 and grew up in Dobbs Ferry, N.Y., a Hudson Valley town about 40 minutes from Manhattan. She is older than Mark by two years and has two younger sisters. Early on, her parents signed her up for piano lessons, but she longed to sing. She enrolled at Harvard in 1999 and studied psychology after being turned down by the music department, she said, because her piano skills were lacking. She continued to sing, using the stage name Randi Jayne.

In 2002 her brother joined her at college. "I don't know if Mark and I ever talked about our feelings, but we overlapped at Harvard and hung out a lot," she said, adding that they were "as close as a brother and sister could be." Ms. Zuckerberg graduated in 2003. (Her brother dropped out.) She moved to New York to work at the advertising firm Ogilvy & Mather before being hired in 2004 as a production assistant on the television show "Forbes on Fox," making $32,000 a year.

In 2005, Mark, who by then had moved to Palo Alto and had received $12.7 million in financing for Facebook, recruited her. "He actually called up my mom and said, 'I'm concerned Randi is in a dead-end career,' " Ms. Zuckerberg said. "He finally said: 'Randi, come out to the office. I think you'll like it.' " She said Mr. Zuckerberg bought her a plane ticket; while visiting the company, she was asked to weigh in on the design of Facebook's logo.

"I had never had anyone hand me that decision-making power," Ms. Zuckerberg said, adding, "I fell for it hook, line and sinker."

On her last night there she joined her brother in his office to negotiate her signing package. Mr. Zuckerberg, then 21, sat behind a desk and slipped her a piece of paper with two lines: one with her salary; another with the number of stock options she would receive. She crossed out the stock options, doubled the salary and slid it back. "He took the pen back from me and rewrote the original offer he proposed," she said. "And, he's like: 'Trust me. You don't want what you think you want.' "

She joined the company as a marketing manager, but made little noise about being the boss's sister.

"It was smarter for her to fall in line and be like one of us," said Kevin Colleran, Facebook's first advertising salesman, adding that Ms. Zuckerberg's responsibilities did not compete with her brother's expertise. "I doubt he's even seen her job reviews. If she was an engineer it would have been much more complicated."

Ms. Zuckerberg looks remarkably like her brother, with saucer-shaped eyes, a long nose and slight frame. But she is more outgoing and early on became an informal conduit for reporters.

"Everyone wants to talk to Mark, but Mark doesn't want to talk to anyone," Mr. Colleran said. "Who better to trust than someone with the last name Zuckerberg?"

That alone would have raised her profile in Silicon Valley, but the natural performer in Ms. Zuckerberg also refused to be squelched. She made a widely posted amateur music video in 2007 satirizing Silicon Valley's start-up culture and began performing at company parties.

Sometimes, however, Ms. Zuckerberg hit discordant notes. At her 2008 bachelorette party at the Hard Rock Hotel in Las Vegas -- she married Brent Tworetzky, a product leader at Chegg.com, a textbook rental company, and the two have a 5-month-old son, Asher -- she was videotaped by a friend, the Internet personality Julia Allison, shimmying poolside in a curve-hugging white bathing suit and tiara. Ms. Zuckerberg lip-synced to the song "Chapel of Love," a pink boa wrapped around her shoulders. The video was posted online by Ms. Allison and widely mocked.

"I think I was a little irresponsible with my creativity in the beginning," Ms. Zuckerberg said. "I didn't think about my personal brand or my responsibility to the company."

If her brother was displeased, she said he did not mention it. But Ms. Zuckerberg felt her brother's ire after another video was posted online in May 2009 in which she discussed Facebook's less than stellar reception at the Republican National Convention.

"Mark was not happy about that, and he told me," she said.

Despite the missteps, Ms. Zuckerberg came up with or oversaw many ambitious media and politics projects for Facebook. In January 2009 the company teamed with CNN to stream President Obama's inauguration live on Facebook. Ms. Zuckerberg was nominated for an Emmy for the "Vote 2010" series on ABC News, which allowed users to watch midterm election coverage on Facebook.

Ms. Zuckerberg said she "went a little rogue" last year and set up a makeshift studio in a closet at the company's headquarters to tape interviews with visitors she found interesting. That led to her conducting live online interviews for Facebook at events, including the World Economic Forum in Davos, Switzerland, where she interviewed Tony Blair, the former prime minister of Britain.

"If I just told the idea to senior management as a concept or theory, they would have said, 'No,' " she said. "But by the time people realized what I was doing it was too late to stop."

EARLIER this year, Ms. Zuckerberg said she began to notice that many of the projects she championed were being given to a team to manage without her authority. "It was a little frustrating," she said. She said she did not discuss the situation with her brother. But as Facebook became more bureaucratic, it seemed to her that there was less room for a personality like hers. "I was butting up against being myself and trying to lie low," she said.

So, Ms. Zuckerberg decided to leave. And, recently, she said she advised her youngest sister, Arielle, who works at Wildfire Interactive, a computer software company in Redwood City, Calif., to not join Facebook until she had established her own reputation.

"I had just spent the last six years creating so much value for other people," Ms. Zuckerberg said. "I had a clear vision. And I wanted to own my vision and create it for myself."

Mr. Zuckerberg declined to be interviewed for this article even after his sister sent him an e-mail asking him to. Ms. Zuckerberg said she got an e-mail from the company's spokesman, Elliot Schrage, in reply. In a statement issued through Mr. Schrage, her brother said, in part: "Randi has always been creative and we put her talent to good use at Facebook."  He added, "Now that she's on her own stage, I know she'll be recognized even more for making the world more open and connected."

At the Clinton Global Initiative conference the day before her karaoke party, a camera and two director's chairs were set up for Ms. Zuckerberg and her guests, including Chelsea Clinton, in a corner of a room reserved for journalists. Matt Hicks, a former Facebook colleague, monitored Ms. Zuckerberg's Facebook page and Twitter account from a laptop, posting comments or taking questions while she interviewed guests. When Ms. Zuckerberg asked the model Petra Nemcova about her children (Ms. Nemcova does not have any), she smoothed over the flub, unruffled by onlookers who floated in and out of view.

If there was a lesson in that, perhaps it was that the show must go on. Ms. Zuckerberg said she had not seen the Academy Award-winning 2010 movie based on her brother's company, "The Social Network," but read the screenplay, describing her family's reaction as "angry and flattered and disgusted and excited." She wondered aloud, though, whether executives at Facebook, even her brother, secretly approved of the movie's release.

Like Mark, she wants to be an entrepreneur. "The next step for me is launching my own live online show, taking everything I've learned from Facebook Live and create my own channel," Ms. Zuckerberg said. Thanks to all of those Facebook stock options, she would also consider investing in a Broadway show -- but only if she were given a small part.

"I feel like I got a winning lottery ticket in my life and the rug could be pulled out from under me at any time," Ms. Zuckerberg said. "I am going to appreciate every last moment of awesomeness I can get."
Comments