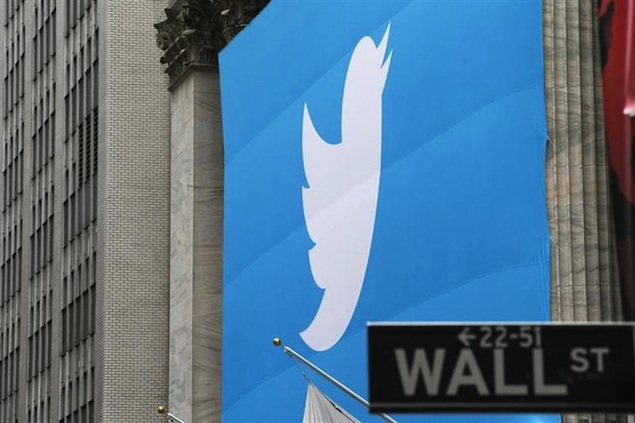 Twitter Inc's slowing user growth has revived concerns about the microblogging service's prospects of one day matching Facebook Inc's 1.2 billion users, prompting at least 16 analysts to cut their target price on the stock.

Twitter's shares, which have shed about a third of their value since the beginning of the year, opened down 11 percent at $37.80 on Wednesday, making it one of the top percentage losers on the New York Stock Exchange.

Twitter has divided Wall Street into two broad camps: those who consider it an overvalued company with fading potential, and those who believe it to be a phenomenon capable of matching Facebook's growth.

A second consecutive quarter of lackluster user growth is testing the patience of investors. Twitter also raised concerns by saying its 255 million monthly users appeared to be checking the service less frequently than a year ago.

Of the 12 analysts who initiated coverage on Twitter with a "buy" or equivalent rating after the company's high-profile market debut in November, five have since downgraded their view.

Ten brokerages, including Bofa Merrill Lynch and UBS, have a "sell" or equivalent rating on the shares.

There were no downgrades on Wednesday, but analysts cut their price targets on the stock by as much as $18 to a low of $35.

"We continue to expect Twitter's stock to underperform the market in the face of (what is likely) a multiple-quarter transition on user engagement and ad product adoption," UBS Equities analyst Eric Sheridan said in a note.

Sheridan, who has a "sell" rating on Twitter shares, cut his target price on the stock to $35 from $42.

Analysts also expressed concerns about Twitter's shares coming under pressure after May 5, when restrictions on the sale of shares by early investors will be lifted.

The company's co-founders, Jack Dorsey and Evan Williams, and Chief Executive Richard Costolo said this month that they do not plan to sell their shares after the post-IPO restrictions are lifted.

While Twitter's quarterly results raised some concerns, at least seven brokerages, including Goldman Sachs and Deutsche Bank, still see the company as a sound bet.

"The company continues to execute near-flawlessly around items in its control like revenue and expenses, but sentiment remains pinned on lackluster MAU (monthly average user) growth," Deutsche Bank analyst Ross Sandler wrote in a note.

Sandler said market sentiment would eventually shift away from users toward revenue growth - just like it did during Facebook's "rough patch" last year.

Facebook struggled with slow user growth last year, drawing criticism from investors and analysts alike, but has since regained Wall Street's favor thanks to its strong mobile ad business.