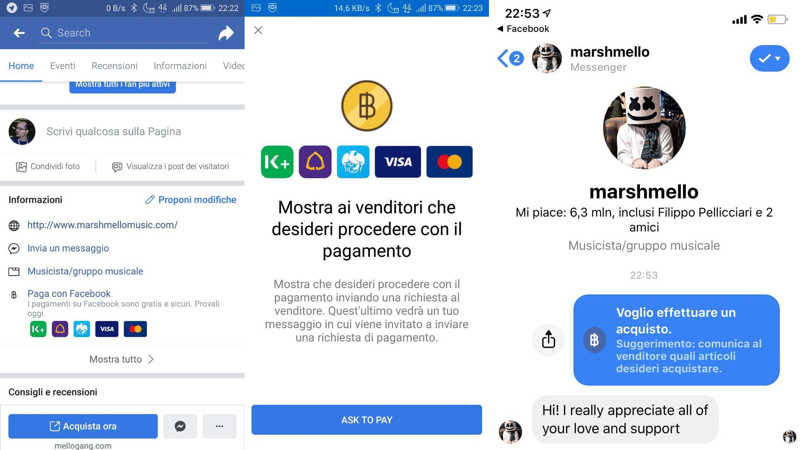 Facebook is rumoured to be working on a cryptocurrency of its own. The world's largest social network could use a virtual currency to enable person-to-person money transfers on its popular apps as services such as Messenger, Instagram, and WhatsApp. Facebook is also reportedly looking at adding blockchain-based user authentication features. Some Italian users are now seeing a new option within Facebook called 'Pay with Facebook' on both Android and iOS apps.

Users in Italy, with their language set as Italian, are now reportedly getting an invitation inside the Facebook app to setup their 'Pay with Facebook' accounts. The reported screenshots include a variation of the Bitcoin icon on top along with smaller icons for other payment methods.

A cryptocurrency, previously speculated to be called Facebook Coin, could be used with the new 'Pay with Facebook' feature. Facebook is also expected to integrate its virtual currency with other apps and services including WhatsApp. The company could be looking at taking inspiration from popular Chinese app WeChat when it comes to payments.

Facebook's rumoured payment system could be its next major source of revenue as the company battles privacy and content filtering issues. The social network is already working towards integrating its major platforms, and a single payment system across all its services could further boost engagement rates.

However, cryptocurrencies are still a grey area when it comes to regulations. Some countries are open to embracing the idea, with regulations, but others have been vocally against the whole idea. It's still too early to speculate how Facebook will implement its virtual currency in these countries if it even plans to introduce one.

MESSAGE Harpreet Singh
Fields marked with * are mandatory
Listen to the latest songs, only on JioSaavn.com