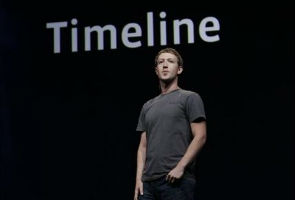 Highlights
Music and media companies are pinning fresh hopes for reviving their businesses on a small ribbon that Facebook has begun putting on user profiles called the "ticker."

The new, slim stream of updates automatically lists users' activity on a range of apps made for listening to music, watching movies, reading news and playing games. The updates come after users consent to the continuous sharing just once.

Clicking on your friends' items in the ticker can lead to automatically being signed up for free trials on services such as music plans Spotify and Rhapsody, many of which may eventually ask for a monthly fee.

While the new feature is billed as a way of fencing off a huge volume of information on what you're doing, for the businesses involved, this passive way of sharing is a giant viral marketing machine.

Axel Dauchez, the chief executive of music subscription service Deezer, said the integration with Facebook is key to his company's plan to roll out in more than 130 countries other than the U.S. over the next several weeks. Deezer has 1.4 million paying customers in France and the U.K.

Facebook users who click on links of songs that friends are playing on Deezer are automatically signed up for a two-week trial with accounts that use their Facebook preferences. Then they are able to listen to their friends' picks in real time or later at their convenience.

Dauchez said he hopes the system spawns a "revolution" in how people listen to music, although it remains to be seen if more people end up paying for 5-euro- and 10-euro-per-month subscriptions.

"Reality will tell me if I'm right or wrong," he said.

In introducing the new system at a developers conference in San Francisco that was viewable online, Facebook CEO Mark Zuckerberg described the sharing as being part of a new product called the "timeline," saying "apps help tell the story of your life." The new system will result in "an order of magnitude more" posts than before, he said. Apps will come with their own set of privacy controls and previous posts can be manually deleted.

Netflix Inc. CEO Reed Hastings, said knowing that a Facebook friend has watched something is more compelling than his company's own recommendation technology, which is based on one's own past viewing behavior. He said because a friend of his watched AMC's "Breaking Bad," he finally got around to seeing it.

"Watching content because my friend did really trumped the algorithm," Hastings told the audience.

Netflix's integration will only be available in Canada and Latin America because an obscure law impedes a U.S. launch for now. Non-members will be prompted to sign up for a free month-long trial if they click on what a friend is watching.

Video service Hulu also launched an app that helps sell its $8-a-month Hulu Plus subscription. While there is a range of free TV and movie content, users who click on a friend's video that is normally reserved for paying customers will be able to see only a 90-second preview before being informed how to sign up for the pay version.

Daniel Ek, founder of music subscription service Spotify, told Facebook developers at the unveiling that the deeper integration will help the world "light up with music." Since its launch in the U.S. in July, the Swedish company has boosted the number of paying customers to more than 2 million globally from 1.6 million previously.

Spotify charges $10 a month for unlimited access to tracks on mobile devices, but a PC-based version is free in the U.S. with no caps on usage for now. Clicking on friends' passive posts puts a program on one's computer that plays back the song.

Freeing people from the hassle of actively sharing songs they like will help keep people engaged in their friends' listening habits without effort, said Spotify's chief content officer, Ken Parks. "Anything that brings the friction out of that is great for everybody," he said.

Rhapsody, a competing $10-a-month unlimited mobile music service, announced it would allow Facebook users 30 days to try out their service, even on mobile devices. Competitor Rdio is giving users a free 7-day trial on mobile devices too.

"The more you help people discover music, the more social it is, the more they will be engaged," said Rhapsody president Jon Irwin. "If they're more engaged, then they're more likely to subscribe."

Facebook continues to add users and has 800 million globally so far. That has made it a huge director of traffic on the Web, and now its display advertising business is bigger than online news giant, Yahoo Inc., according to eMarketer

That's one reason news media companies are jumping on board.

Yahoo developed a way to let Facebook users know what stories their friends are reading after logging in. A running tally of stories friends have clicked on appears at the top of the page. The plan is to start the integration with the news section on the U.S. site and expand it into the sports, finance and entertainment sections next year.

The Washington Post launched an app called a Social Reader that creates unique front pages that pull from multiple sources based on what you and your friends are reading. Washington Post Co. CEO Donald Graham said the plan is to draw a big audience but not put advertising in the app for now.