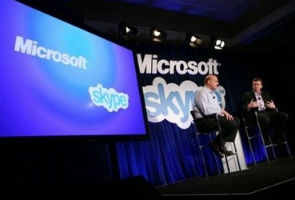 Highlights
Microsoft is buying Internet voice and video leader Skype for $8.5 billion dollars in a move aimed at boosting its presence in an online arena dominated by Google and Facebook.

The purchase of Skype, which reportedly also attracted interest from Cisco, Facebook and Google, is the largest ever by Microsoft and gives it control of one of the few companies whose name has become a verb, as in to "Skype."

Analysts were divided over the acquisition, with some saying it was a good strategic move for the US software giant and others saying Microsoft paid too much and would stifle innovation at Skype.

Skype, one of the top applications on Apple's iPhone and on smartphones powered by Google's Android software, has some 170 million users who will now be able to "Skype" using Windows-powered phones or even Xbox game consoles.

"Skype is a phenomenal service that is loved by millions of people around the world," Microsoft chief executive Steve Ballmer said in a statement early Tuesday announcing the purchase.

"Together we will create the future of real-time communications so people can easily stay connected to family, friends, clients and colleagues anywhere in the world."

Microsoft said Skype will become a new business division within Microsoft with Skype CEO Tony Bates assuming the title of president of the Microsoft Skype Division, reporting directly to Ballmer.

Skype users can make low-cost or free phone calls over the Internet using their computers or smartphones. Skype bypasses the standard telephone network by channeling voice and video calls over the Web.

Buying Skype could be a way for Microsoft to shed some of its business software image and gain momentum in a hot smartphone market at a time when Internet lifestyles are going mobile.

Microsoft's Windows is the dominant computer operating system but its Bing search engine lags far behind Google and its Windows Phone mobile platform has been losing market share to Apple's iPhone, Google's Android and Research In Motion's Blackberry.

"Mobile is clearly moving to be a rich communications capability above and beyond just voice," Bates said at a joint press conference with Ballmer in San Francisco. "We also focus very, very heavily on video. Video is in our DNA."

"At Microsoft we see tremendous opportunity to bring together what people want all on a single screen," Ballmer said. "We are committed to optimize Skype for TV with Xbox and Kinect, for the phone and for the PC."

Microsoft's biggest acquisition until now had been its 2007 buy of digital marketing firm aQuantive for $6.3 billion. Microsoft unsuccessfully tried to buy Yahoo! in 2008 for $47.5 billion.

Microsoft and Skype said the deal has been approved by the boards of both the Redmond, Washington-based Microsoft and the Luxembourg-based Skype, which is owned by investor group Silver Lake.

Magnus Rehle, managing director of Greenwich Consulting, said Microsoft is "buying a brand and a big chunk of customers."

"It could (also) be a defensive strategy from them... to block Facebook and Google from doing it instead," Rehle added.

Analyst Douglas McIntyre of 247WallSt.com said Microsoft's "real motive for a Skype buyout is likely to be to increase its mobile search engine share, something it has been unable to do so far."

Gartner research vice president Leif-Olof Wallin said Microsoft had been forced to pay a high price for Skype but the deal has potential.

"The acquisition price sort of indicates that there has been some kind of bidding process that drove up the price," Wallin said.

"If this is integrated in the right way, it has a lot of potential to leverage platforms like Xbox and Windows Phone to new heights," he said.

Skype was founded in 2003 and acquired by online auction giant eBay in September 2005. It was sold to the investment group led by Silver Lake in November 2009 in a deal that valued the company at $2.75 billion.

Skype last year announced plans for an initial public offering of stock and appeared on its way to profitability, but investors are evidently eager for a payoff.

Other members of the investor group led by Silver Lake include eBay, CPP Investment Board, Joltid Limited, Europlay Capital Advisors and Andreessen Horowitz.

The acquisition is subject to regulatory approvals which the companies said they expect to obtain this year.