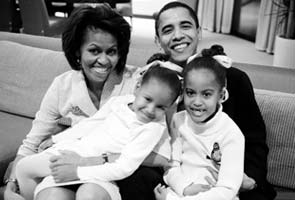 Mrs. Obama captioned some of the photos herself, including recent shots of the Obama family skipping stones and playing minigolf, and older family photos including a wedding day picture.

By midmorning, Mrs. Obama had more than 1,600 followers on the site. Pinterest is particularly popular with women, and represents one more tool for reaching out to voters in an election year.