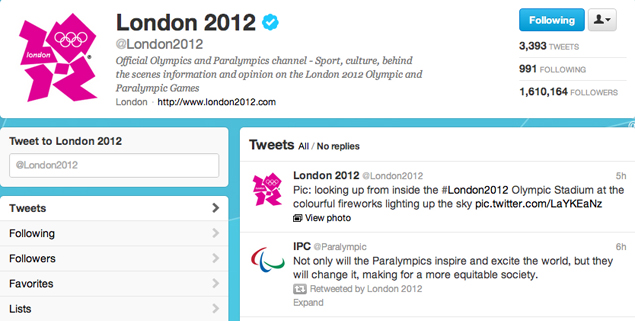 The curtains on the London 2012 Olympics were finally drawn after 17 days of glorious events that took place across various venues. Millions all around the world witnessed some memorable moments of triumph, defeat and true sportsmanship.

The London 2012 Olympics were also dubbed as one of the biggest events in social media circles and for good reason. Micro-blogging website Twitter revealed some rather interesting stats on the number of tweets sent during the games.

There were a whopping 150 million Olympics related tweets over the past 16 days with Usain Bolt being the most talked about athlete of the Games and UK's very own Spice girls setting a new Olympic record for inspiring 116,000 tweets per minute during the closing ceremony.

Twitter mentioned on its official blog that Jamaica's Bolt topped the list for receiving 80,000 tweets per minute (TPM) during his gold medal-winning 200m sprint and 74,000 TPM during his 100m run. Others in the list included Andy Murray of United Kingdom gathering 57,000 TPM for winning gold in the men's tennis singles.

Twitter has provided a list of top ten Olympians, who inspired more than 1 million tweets. Michael Phelps and Tom Daley followed in second and third positions respectively for being the most talked about Olympians after Bolt.

Apart from athletes, other celebrities also took to Twitter during the Games. One such tweet was from US President Barack Obama congratulating Phelps for breaking the all-time Olympic medal record.

Talking of sports, Football took all the attention with 5 million tweets followed by swimming, gymnastics and volleyball. The Twitter blog also stated that the biggest tweeting moments that came during the heat of competition included Kobe Bryant's dunk towards the end of the USA-Spain basketball game, and Hope Solo's land-diving save in the women's USA-Japan soccer match.