London 2012: If only Shakespeare could have tweeted 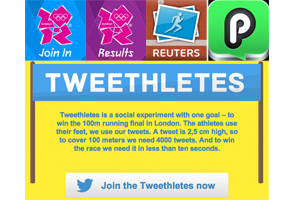 If only Shakespeare could have tweeted.

Transported 400 years into the future, he would have relished trying to sum up what he saw at the London 2012 Olympics in 140 characters or less.

He came closer than most in around 1599 with lines from the prologue of "Henry V": "A kingdom for a stage, princes to act/And monarchs to behold the swelling scene!"

But not even a full five acts of the Bard at his best could do justice to the endless twists and turns of the Games, which enter the home stretch of the final week on Monday.

The Olympics began with an exuberant, and distinctly British ceremony called "Isles of Wonder", inspired by Shakespeare's "The Tempest".

As the sporting drama unfolded in boxing rings, on rowing lakes, along running tracks and beyond, the playwright's famous phrase "all the world's a stage" seemed more apt.

Some 10,500 athletes from 204 countries are taking part, including Libya and Egypt which have emerged from the tumult of revolution. Seeds of social change were reflected in Saudi Arabia sending its first women to the Olympics.

On the field of play there has been the spectacle of agonisingly close contests.

Nicola Spirig of Switzerland was declared winner of the women's triathlon against Lisa Norden of Sweden only after judges examined the photo-finish. Following two hours of running, swimming and cycling, 15 centimetres separated them.

At the other end of the spectrum, a handful of athletes destroyed their rivals in something bordering on disdain.

Cyclist Bradley Wiggins became the host nation's most decorated Olympian, and contender for a knighthood, by dominating the men's time trial just 10 days after winning the "greatest race of all", the Tour de France, the first Briton to do so.

Jamaican sprinter Usain Bolt proved that lightning can strike twice by retaining the 100 metres sprint title, the most coveted of all Olympic golds, in a searing 9.63 seconds - the second fastest run of all time.

Television viewers may have wondered if they were watching on a loop as American swimmer Michael Phelps kept on adding to his medal tally in the pool.

Four more golds in London helped his total to 22, including 18 golds, beyond the previous Olympic record of 18 held by former Soviet gymnast Larisa Latynina.

Some competitors inspire awe, others affection.

American 16-year-old gymnast Gabby Douglas won the women's all-round gold, and the world's hearts, with her perky smile and acrobatic prowess that earned her the tag "Flying Squirrel".

A tearful Russian world champion Victoria Komova told the other side of every happy Olympic tale by removing her silver medal in disappointment before leaving the arena following the medal ceremony.

"It was too heavy," the gymnast told reporters.

Women wronged?
"The lady doth protest too much," Shakespeare may have said of South Korean Shin A Lam, who, in one of the Games' most abiding images, sat alone on the fencing piste weeping for an hour in protest at her elimination from an epee semi-final.

The official clock was reset in error, giving her German opponent just enough time to launch a last-ditch attack to win.

Two of the biggest stories of London 2012 have been furores involving female Asian athletes.

In the case of Ye Shiwen, the 16-year-old swimmer from China, her world record win in the 400 metre individual medley including final leg times that would have beaten the fastest men raised eyebrows as well as cheers.

An American swimming coach openly voiced suspicion of the involvement of performance-enhancing drugs, and, despite the swimming community in London rallying behind the young prodigy, Ye was mired in a controversy that took on a life of its own.

Privately, her 396-strong team and the big Chinese media contingent fumed at the insinuations.

By the halfway stage, four athletes had been suspended for doping by the International Olympic Committee since the start of the Olympic period on July 16.

Eight more, all Asian badminton players, were expelled for breaking the spirit of the sport by deliberately losing before angry crowds in order to manipulate the draw, skewing the ancient Olympic motto of "Faster, Higher, Stronger".

A member of Britain's gold medal-winning cycling sprint team then admitted to crashing deliberately following a stumble in order to gain a restart, sullying the later victory and blurring the boundaries of where games end and gamesmanship begins.

Disgraced Chinese badminton player Yu Yang, who was thrown out despite playing within the rules, reacted by quitting the sport in a posting on her Tencent microblog.

"Goodbye my beloved badminton," she wrote, blaming organisers for putting rules in place that encouraged "throwing" matches. "You have heartlessly shattered our dreams."

Yu's "coup de theatre" was delivered through social media, underlining how, in one way at least, London 2012 is like no other Olympics in history. Little wonder the media have dubbed it the "Twitter Games".

While the site has been crammed with celebratory messages to and from winners, it has also provided a platform for unsavoury comments which ended the Olympic dreams of two athletes.

Two days before the opening ceremony, Greek triple jumper Paraskevi Papachristou was withdrawn from the team after tweeting a racist remark.

Five days later a Swiss soccer player was thrown out for an offensive remark about South Korea, and British police arrested a man after offensive tweets were sent to British diver Tom Daley when he failed to win a medal in his first event.

Monarchy riding high
Queen Elizabeth I would have watched Shakespeare's plays in the privacy of her own court. Queen Elizabeth II and her family have been far more public in their participation at the Games.

It seemed things could get no better for the monarchy, basking in the glow of an adoring nation after the queen's glittering Diamond Jubilee celebrations this summer and the wedding of Prince William and Kate Middleton in 2011.

Yet Her Majesty became the unlikely star of the opening ceremony, and the Games in general, with a comedy cameo in a video beamed to a billion people around the world.

"Good evening, Mr Bond" was all she had to say, but the participation of a normally reserved head of state in the short film with James Bond actor Daniel Craig, was enough.

"Of all the things that people come up to me and speak about, it is still the opening ceremony and it is still the (queen's) parachute jump," Games chief and two-time Olympic running champion Sebastian Coe told Reuters.

In fact, the 86-year-old monarch did not jump out of a helicopter at the opening - it was a stunt double.

Royals have not been shy to come out to cheer for "Team GB" throughout the Games, with the queen's 91-year-old husband Prince Philip supporting his granddaughter Zara Phillips on her way to a silver medal in the equestrian eventing.

The popular princes William and Harry have popped up almost daily at venues across London and beyond, and, in the "paparazzi moment" of the Games, the Duke and Duchess of Cambridge shared a very public hug of joy at the cycling velodrome.

Buckingham Palace said Harry, portrayed in the press as an international playboy, would attend the women's beach volleyball in Horse Guards Parade, where debate has raged over whether the players' shorts are just too short.

The royals have been part of a very deliberate "brand Britain" marketing campaign, with historic sites like Buckingham Palace, Hampton Court and the Tower of London serving as dramatic backdrops.

In fact, the Olympics have sparked a national bout of self-examination which, for once, has ended in more smiles than grimaces of shame.

A country aware of the imperial past is used to beating itself up over its diminished place in the world, but ever since an eccentric opening ceremony that highlighted its role in culture and history, many Britons have beamed with pride.

Empty seats and an embarrassing mix-up over the lack of security guards to keep the Games safe have been turned around in the last few days by packed venues, the sight of smiling British soldiers cheerfully greeting visitors to the Olympic Park and even some sunshine.

Stunning victories by home athletes like heptathlon champion and Olympic "poster girl" Jessica Ennis and 10,000 metre runner Mo Farah, who won amid the deafening roars of 80,000 spectators on a magic night on Saturday, have clearly helped.

In a way, that evening was a microcosm of modern, multicultural Britain - Farah was an immigrant from Somalia and Ennis born to a Jamaican father.

Choosing one of 16 British golds won by Monday morning would be tough.

Scot Andy Murray put the hurt of four grand slam final defeats behind him to beat Roger Federer in the men's tennis final, although Katherine Grainger's win in the women's double sculls rowing after three consecutive silvers may prevail.

Olympic giants China and the United States led the table on Monday, with the host nation placed third.

London hat-trick
In Shakespeare's Roman tragedy "Coriolanus", Sicinius asks: "What is the city but the people?"

In London, hundreds of thousands of people have milled around the main Olympic site from the start, come sunshine or rain, wrapped in the Union Jack flag and making the Games a global affair with a distinctly local flavour.

Not everyone has been swept away in the capital, the first city to have hosted the Games three times.

Just down the road from the gleaming Olympic Park built in a previously run-down area of London's East End, Britain's gold rush has done little to alleviate the grind of poverty, unemployment and uncertain futures.

It seems that, temporarily at least, social alienation exacerbated by Britain's economic recession has been brushed under the carpet of national euphoria a year after riots swept across parts of London and beyond.

Until August 12, when the Games end, that may continue in the media and beyond. But what comes next could be the post-party hangover to end all hangovers.

To quote the Bard one last time: "Glory is like a circle in the water/Which never ceaseth to enlarge itself/Till, by broad spreading, it disperse to naught."