Rapper Iggy Azalea, who has built a fan base through social media but frequently engaged in bitter feuds, says she's taking a break from the Internet and its "pettiness."

The Australian rapper told her 4.3 million Twitter followers that she would "be taking some time away from social media," with her management running her accounts unless Azalea initials a tweet.

"I feel the hatred and pettiness I see online at all times is making me become an angry person and I cannot be that," she tweeted.

"The Internet is the ugliest reflection of mankind there is," she tweeted.

But Azalea appeared to find the social media habit hard to break. Soon after her message, she took another Twitter user to task for describing her message as a "rant," saying it made her sound like "some crazed, babbling angry man" on the street. 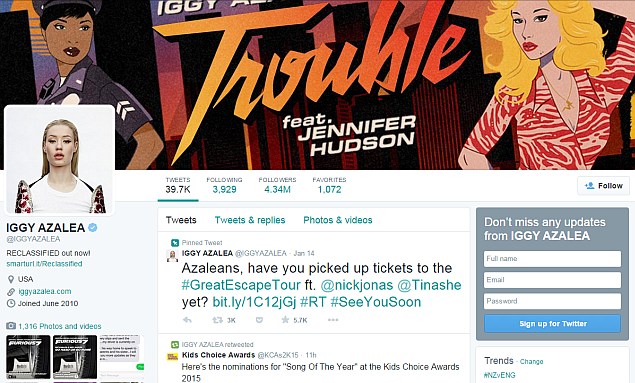 Social media has quickly taken on a massive importance for rising artists, who see it as a modern way to connect with fans, although a number of long-established musicians have been reluctant.

Azalea, who released her debut album last year, had a high-profile Twitter feud with fellow rapper Azealia Banks who accused the white Australian of exploitation by performing in an identifiably African American accent.

Azalea's Twitter battles have more recently take on more parochial concerns, including lashing out over her pictures in a fashion shoot for shoe designer Steve Madden.

She also took aim at pizza chain Papa John's, accusing the deliverer of handing out her number.

Volvo's Self-Driving Cars Due in 2017, Will React 'Faster Than Most Humans'
Micromax Bolt D321 With 5-Inch Display Listed on Company Site