How You Use Twitter Can Reveal Your Income Level, Says Study

Linguists and psychologists have been using the content of messages on Twitter to learn more about our society - in areas such as gender, age trends and politics. Now, a new study by computer scientists at the University of Pennsylvania has found that the behaviors of Twitter users also correlate with their income levels.

The team of researchers, led by Daniel Preotiuc-Pietro of Penn's Positive Psychology Center, analyzed more than 10 million posts of 5,191 publicly available Twitter user profiles. The data was collected in August 2014, and the most recent 3,000 posts from each person were used.

To calculate income levels, the researchers used England's job code system to sort the self-described occupations provided in the profiles and assign a representative, mean income for each code. That data was then used to identify links to a user's wealth and the person's tweeting behavior. 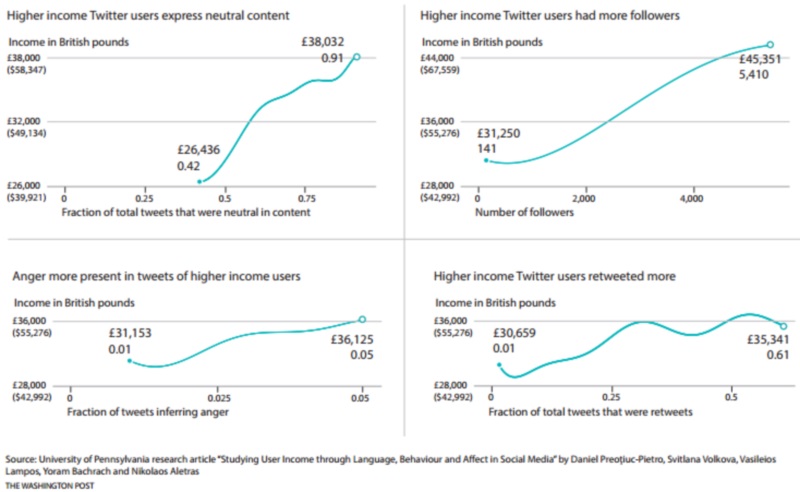 Although the reason behind the trend is unclear, it is also interesting that Twitter users making more money retweeted more content than Twitter users earning less. And lesser-paid tweeters included links more often in their postings.

The researchers also analyzed the content of the messages. Feelings of fear and anger inferred in tweets of high-income users stood out in particular.

How Cities Can Prepare for Self-Driving Cars, From a Guy Who Would Know
Mobile App Veuon Connects Job Seekers, Employers Geographically