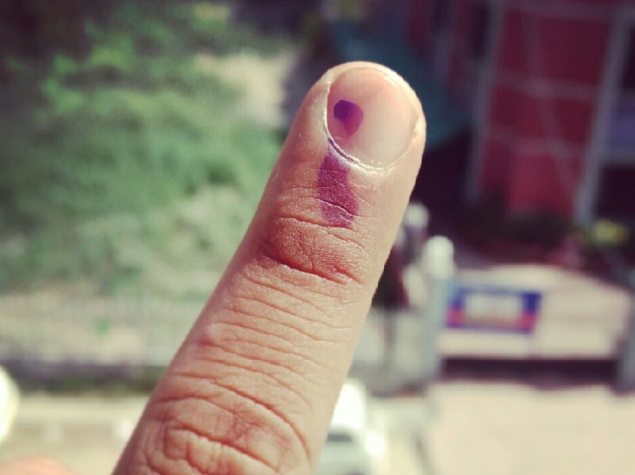 Expressing pride and exuberance after casting their ballot, voters - young and not so young - have taken to the social media across India, flaunting their inked finger as proof of exercise of their democratic right and are urging others to vote.

Pictures of inked finger, with accompanying messages like "my vote, my pride", "best thing I have done as an Indian citizen" are being posted on social networking sites like Twitter and Facebook as the national capital and several other states went to the polls in the third phase of the nine-phase elections Thursday.

"Koi bhi desh perfect nai hota, use perfect banana padta hai' (no country is perfect, it takes effort to make it perfect) ..did my bit to make India perfect," Kevin posted on Twitter with a picture.

Another Twitter user Anshul Bharadwaj wrote: "This is more meaningful than any other tattoo. Vote for change."

Ankit Sinha, a PR professional, took to Facebook to urge people to vote.

"It's time to change the nation. So please vote," Sinha posted.

Shravan Gupta, 60, who cast his vote at the Krishna Nagar polling booth in east Delhi, was seen smilingly flaunting his index finger on his son Kuldeep's Facebook page.

"I voted for stability. That's what we need most," Gupta said.

And there are others who hope their vote will help bring a change in the country.

Urging fellow citizens to be responsible voters, Jyoti Sharma tweeted: "We voted, did you?"