Game of Thrones Creator Joins Twitter, Tweets About His Livejournal 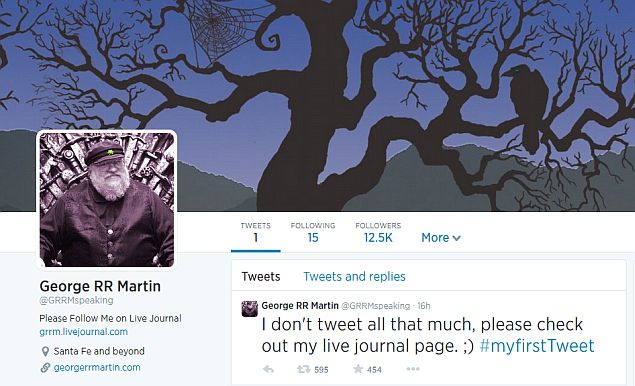 George R R Martin, the author of the popular A Song of Ice and Fire series of books, which serve as the source material for the popular HBO show Game of Thrones, has now joined Twitter. You can follow handle @GRRMspeaking to get all his updates, though as he warns in his first tweet, he doesn't plan to tweet too often.

I don't tweet all that much, please check out my live journal page. ;) #myfirstTweet

Of course, Twitter is rife with impersonators, and unlike the CIA which got verified in time for its first Tweet,Martin's account is still unverified, but publisher Random House was athand to confirm that this handle is in fact, the real deal.

Are you following a #GRRM impersonator? We can officially announce that @GRRMspeaking is the real deal (though he won't be tweeting much)...

Fans of Martin's work probably already know about his Livejournal account, the Not a Blog blog, where he has been posting all kinds of things, often not related to the books or the TV show. Just before the last episode, Martin posted about it and told his fans that he hasn't seen the episode, but at other times, he posts about movies, promotes upcoming authors and just talks sports. It's a fun blog, though if you're just a fan of the show then it might seem a little too random at times. If you're looking for updates directly related to his work, such as the Winds of Winter excerpts that have been released, check out the official website instead.