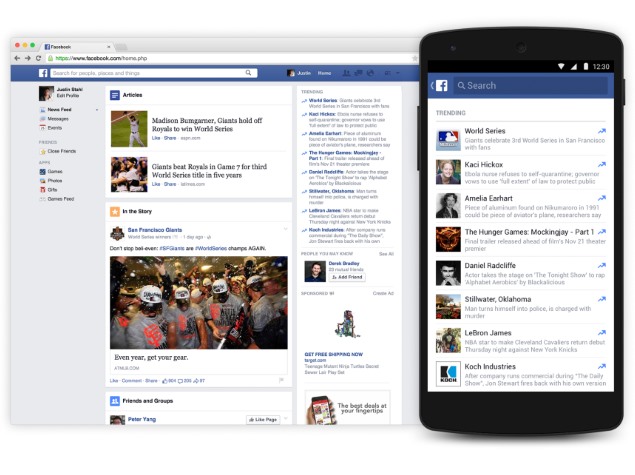 Facebook on Wednesday announced that it is bringing the 'Trending' topics section to Android with improvements. Earlier the feature was limited to Desktop version of Facebook only, highlighting relevant and popular news stories.

First introduced in January this year, Facebook had said that it is testing the 'Trending' feature in its app for smartphones and tablets.

Now, the social networking giant has announced that the new Trending experience finally begins rolling out, starting Wednesday. As yet, the new overall improved section will be available to people on Facebook in the US for Android and the Web. For other regions and iOS users, the support is coming soon, said Facebook via a Newsroom post.

The company also notes that it hasn't changed the way Trending topics are determined and like always, only public posts and posts that users have themselves in the audience will be shown in Trending. For example - updates from friends or groups that a user belongs to will be shown in their Trending section.

Additionally, the feed below the new sections will continue to display relevant posts ranked by engagement, timeliness and other factors.

In the improved Trending section, users will see conversations from up to five different sections, categorised as:

Articles - shows you how news organizations are covering the story.

In the Story - shows you posts from people who are part of the story.

Friends and Groups - shows you what people in your network are saying.

Near the Scene - shows you posts from people near where the story is unfolding.

Live Feed - shows you a real-time stream of reactions from people around the world.