Facebook's director in spotlight after cashing out 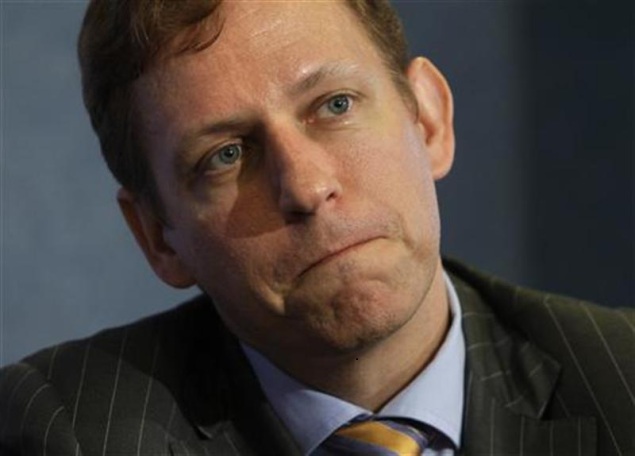 Peter Thiel was the first investor to take a gamble on Facebook Inc. Now some people are wondering whether, in selling most of his stake, the Facebook board member is signaling to others that it's time to rush for the exits.

Thiel, the co-founder of PayPal who invested in Facebook in 2004, sold roughly $400 million worth of Facebook shares last week as the first restrictions barring insider selling were lifted.

The sales, which were conducted as part of a stock sale plan that Thiel entered into in May, have dealt another blow to Facebook's reputation among some investors in the wake of a rocky debut that has wiped out roughly 50 percent of its market value. And it has raised questions about whether Thiel's move conflicts with his responsibilities as a Facebook director.

"It's a vote of no-confidence from a board member," said Max Wolff, an analyst at Greencrest Capital.

"If he wants to serve primarily as a self-interested investor, that's fine. But then you can't be on the board. Boards of directors are not made up of people whose primary interests are in their checkbook," said Wolff, who said he believed Thiel should resign from the board.

"From a shareholder standpoint, if a VC is going to be on the board you'd like to think that they still have a large position in the company and that they're interested in making it be more valuable," said Walter Price, a portfolio manager at RCM Capital Management which does not own Facebook shares. "It sends a mixed message when they sell most of their stock and they still stay on the board," he said.

The 44-year-old Thiel still owns roughly 5.6 million shares of Facebook, worth around $107 million at Tuesday's closing price of $19.14 per share.

That stake means he still has "skin in the game," said James Post, a professor of management at Boston University who specializes in corporate governance issues.

"The worst you can say is that it may reflect perhaps a questionable judgment about getting rid of all these shares at a time when such big questions are looming about Facebook's future," said Post. But he said he believed that Thiel's sales do not disqualify him from serving on the board.

The stock sales are the latest in a seemingly endless string of setbacks and controversies to plague Facebook since its highly anticipated IPO in May.

The world's No. 1 online social networking website, with roughly 955 million users, experienced brisk demand for its shares when it was a private company and became the only U.S. company to debut with a market value of more than $100 billion.

But technical glitches with the Nasdaq stock exchange marred the stock's first day of trading and concerns about the company's slowing revenue growth have pressured the company's shares since then.

He invested $500,000 in Facebook at a $5 million valuation in September 2004, seven months after the company was created by Mark Zuckerberg in a Harvard dorm room. In 2006, one of Thiel's investment firms, the Founders Fund, participated in a $27.5 million funding round along with Greylock Partners, Meritech Capital Partners and Accel Partners.

The Facebook investment is by far the most successful of Thiel's investments, which have also included stakes in LinkedIn Corp, Yelp Inc and SpaceX.

Thiel sold 16.8 million shares of Facebook at the IPO for $38 a share, for total proceeds of roughly $640 million. And he sold a significant number of shares through a private transaction in 2009.

Facebook, which declined to comment on Thiel's stock sales, said in its prospectus in May that the company believes Thiel should serve on the board because of his "extensive experience as an entrepreneur and venture capitalist, and as one of our early investors."

It's common for early investors, such as venture capitalists and angel investors, to have seats on the boards of companies they've backed. And venture firms typically distribute shares of the company to their limited partners following an IPO, so that the venture fund's investors can get a return on the investment.

But there are no "hard and fast rules" for when those investors should exit the board after a company's IPO, said Nick Sturiale, a partner at venture capital firm Jafco Ventures.

"It's usually a discussion between the CEO and the board member and the partnership whether they stay, and for how long," he said.

John Doerr, a partner at venture capital firm Kleiner Perkins Caufield & Byers, is on the board of Google Inc and was on the board of Amazon.com Inc until 2010 - both companies that Kleiner funded.

If the fund that a director represents sells its stake after the IPO, the director should also consider stepping down, said Charles Elson, a University of Delaware finance professor specializing in corporate governance.

The topic sparked a lively debate on Tuesday, as venture capitalists and technology company executives unleashed a rash of Twitter messages and blog posts to defend or criticize the insider sales.

Fred Wilson, a principal with Union Square Ventures, noted in a post on his personal blog that insider selling is to be expected following an IPO.

"Those who took the risk of losing all the capital they bet on 20 year old Mark Zuckerberg are entitled to their return," wrote Wilson.