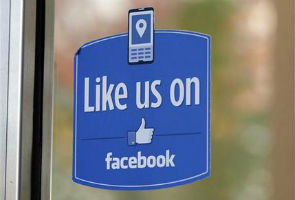 Highlights
The goody-two-shoes among us say it's better to give than to receive. That's not true for the average Facebook user, though.

A new study out Friday found that the average user of the world's biggest online social network gets more than they give. That means more messages, more "likes" and more comments. Yes, even more "pokes."

Behind all that is Facebook's relatively small group of "power users," who do more than their share of tagging, liking and uploading. The report from the Pew Research Center's Internet and American Life Project comes two days after Facebook filed for a $5 billion initial public offering of stock that could eventually value the company at $100 billion.

Key to that mammoth valuation will be Facebook's ability to convince advertisers they can make money from the billons of connections and interactions that people partake in on its website and beyond. Though Pew's findings don't address the commercial side of people's activities, they shed important light on how people use the site and what they get out of it.

The study is the product of Pew's analysis of Facebook users' activities in November 2010. It consisted of data that Facebook provided to Pew after 269 users gave their permission. Those users were identified through a random telephone survey about broader Internet issues.

The researchers found that about 20 percent to 30 percent of Facebook users fell into the "power user" category, though they tended to specialize in different types of activities on Facebook. Some of them sent a lot of friend requests, while others tagged more photos than the average user. Only 5 percent were power users in every activity that Pew logged.

The way this plays out is that the average user is more "liked" than they click "like" on other's posts. They receive more friend requests than they send. On average, 63 percent of Facebook users studied received friend requests in the survey month while only 40 percent made a friend request.

The result? It feels good to be on Facebook. It might even feel better than life off Facebook. After all, there's no dislike button, and friends are unlikely to post harsh comments on your page. Instead, people you might not have seen in years bombard you with positive affirmations day after day, year after year.

"You keep getting all these wonderful positive rewards," said Keith Hampton, the study's main author and a Rutgers University professor. "That's pretty hard to give up."

Getting more than you are giving, in terms of emotional support, "is kind of what you are looking for," he added.

In fact it was the opposite. The longer someone had been using Facebook, the more frequently they posted status updates, pressed "like" and commented on friends' content.

"For most people, the longer they are on Facebook, the more they do on Facebook," Hampton said.

The original phone survey of 2,255 adults was done in October and November of 2010 and has a margin of error of plus or minus 2.3 percentage points. At the end of that survey, users were asked for consent for Facebook to share data. Twelve percent of the survey participants agreed.
Comments