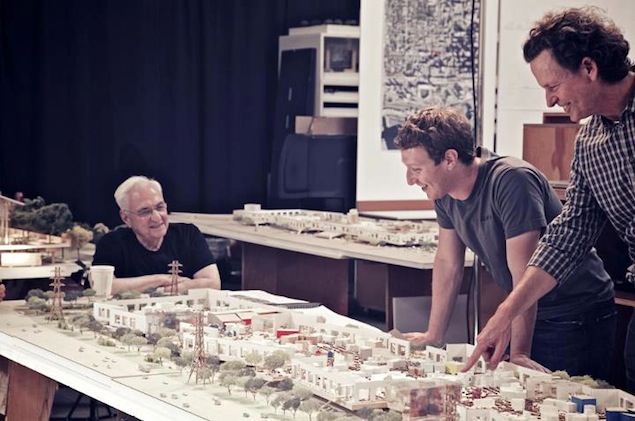 Facebook Inc on Friday unveiled plans for a massive new campus annex in Menlo Park to be designed by Frank Gehry, the renowned architect who has won plaudits for metal-sheathed works like the Guggenheim Museum in Bilbao, Spain, and the Walt Disney Concert Hall in Los Angeles.

Plans for the site, which Facebook will submit to local city officials for approval on Monday, depict Gehry's vision of a single-story, hangar-like building covering 420,000 square feet, or roughly the area of eight football fields combined under one roof.

The project will likely amount to a significant expense for a newly public company that's been closely scrutinised by investors since its disappointing May debut. Facebook shares have hovered at nearly half its $38 IPO price in recent weeks on concerns about whether it can sustain revenue growth.

Facebook declined to reveal the development's projected cost, saying only that it would fall in line with other Silicon Valley office buildings of a similar size.

Facebook intends to shift thousands of software engineers, designers and product executives who work directly on the world's No 1 social network to the new building, which is on the opposite side of a highway from the company's existing campus and near a rugged stretch of the San Francisco Bay waterfront.

Business executives and support staff will remain in its current offices, while a tram will shuttle employees back and forth through an tunnel connecting the two work sites.

Despite its massive area, the new structure will have few interior walls and instead resemble a minimalist warehouse with an open layout, so the social network's engineers and designers can easily collaborate on projects, according to a company blog post by Everett Katigbak, an environmental design manager.

Scattered around the building will be numerous cafes and a restaurant and a garden will nearly span the entire roof.

"It will be almost an engineering paradise," Slater Tow, a Facebook spokesman, said.

And Google Inc has long resided in its "Googleplex" campus in Mountain View, California.

Google, one of Facebook's fiercest competitors, is no stranger to Frank Gehry, either. The search giant opened new offices earlier this year in Venice, California, at the iconoclastic "Binoculars Building," one of Gehry's best-known works in Los Angeles.