Defending champion Spain's stunning elimination Wednesday after a 2-0 defeat to Chile generated a lot of buzz, though not as much as the Cup's opening match between Brazil and Croatia.

Google, meanwhile, tracked more than 641 million World Cup-related searches. In the week leading up the U.S. team's game against Ghana on Monday, there were 10 times more searches for the World Cup in the U.S. than for the NBA Finals, which were in progress at the time.

(Also see: How to Watch Fifa World Cup 2014 Live on Your PC, Smartphone or Tablet)

Here's a look at how the World Cup fared online this week:

Tweet deluge
There were 4.9 million tweets sent out Monday during the U.S. team's match against Ghana. That compared with 12.2 million during the opening game last week between Brazil and Croatia, the most tweeted-about match so far. In comparison, there were 19.1 million tweets sent about this year's Oscars, but that was within a 12-hour window surrounding the award show. All 32 participating World Cup teams have Twitter accounts - latecomer Iran joined just in time last week as (at)TeamMeliIran.

The little guy
Notice anything different on Google Maps this week? Look a little closer. That's right, the little yellow guy that guides users through the Street View feature ("Pegman," as he's called), has been dressed up in black shorts and a white T-shirt and is holding a soccer ball. While you're at it, you can also look inside all the World Cup stadiums using Street View. 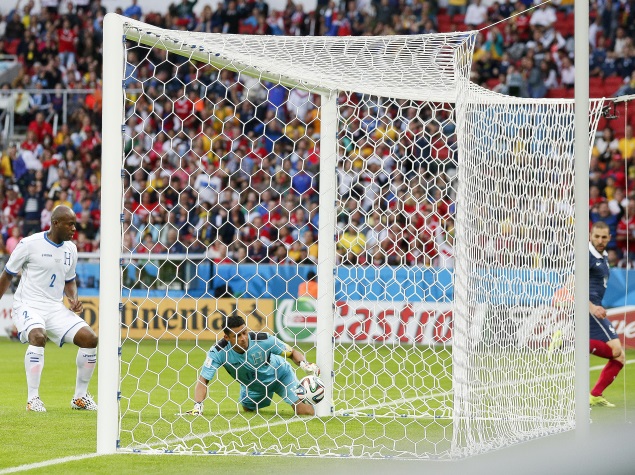 Who's talking on Facebook
Watching the U.S. beat Ghana on Monday, men aged 25 to 34 were posting about the match the most, followed by men ages 18 to 24, then men 35-44. Women between 25 and 34 came next. As for countries, the top 5 countries with the most posts were, in order, the U.S., Brazil, Indonesia, Thailand and England. In all, 10 million people generated 15 million "interactions" on Facebook, which include posts, comments, likes and shares.

Why Thailand, you ask, considering it's not in the tournament? The country's military junta, in an effort to "return happiness to the people," negotiated a deal with the tournament's broadcaster to allow all the games to be shown for free. Previously, the broadcaster had only planned to show 22 of the 64 matches for free.

Goals on Google?
Google is sharing some World Cup stats that look at what people are searching for during the matches. In anticipation of Saturday's Germany vs. Ghana game, for example people in Germany were searching for Ghana player Kevin Prince Boateng 20 percent more than for his brother Jerome Boateng - even though the Jerome plays for Germany.

Germans were also searching for caipirinhas more often than people in Brazil, perhaps because Brazilians already know how to concoct their national cocktail, made from cachaca, sugar and lime. In Brazil, which tied with Mexico on Tuesday, searches for a Mexican TV character called the Crimson Grasshopper soared after Mexico fans dressed as "El Chapulin Colorado" to support their team.