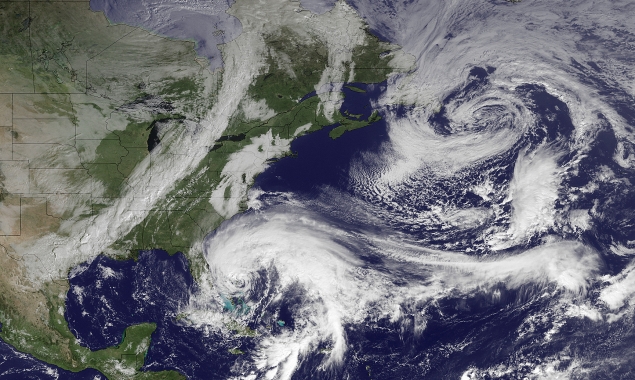 Whether you call it Frankenstorm, Stormpocalypse or simply Hurricane Sandy, the giant weather system barreling into the East Coast is a favorite topic of conversation on social media from Facebook to Twitter. As people post updates to friends and family, relay emergency information and lighten the mood with humor, it's clear that discussing natural disasters on social media has become as much a part of the experience as stocking up on bread and batteries.

As of Monday afternoon, the hashtag "Sandy" had 233,000 photos posted on Instagram, the mobile photo-sharing service owned by Facebook. "Hurricanesandy," meanwhile, had 100,000 photos and "Frankenstorm" had 20,000 and growing.

As they waited for the storm to hit over the weekend, people posted photos of hurricane-preparedness supplies ranging from canned goods to board games and bottles of wine. Empty grocery store shelves where bread should have been also showed up on Facebook and Instagram.

"There are now 10 pictures per second being posted with the hashtag "Sandy" most are images of people prepping for the storm and images of scenes outdoors, said Instagram CEO Kevin Systorm in an emailed statement. "I think this demonstrates how Instagram is quickly becoming a useful tool to see the world as it happens especially for important world events like this."

By Monday, dispatches about storm preparations gave way to messages of anticipation and real-time updates. Among U.S. users, the terms "Sandy", "Hurricane Sandy" and "Hurricane" were the most-used terms on Facebook, followed by "stay safe" and "be safe." In fact, all of the top 10 most-mentioned phrases on Facebook related to the storm in some way among U.S. users, the company said. "Power," ''cold," ''my friends" and "prayers" were also in the top 10.

To gauge how much its users are talking about a particular topic, Facebook uses a measurement tool it calls the "talk meter," which ranks terms around a topic or event on a scale of 1 to 10. Tops that generate the most buzz receive a 10. As of Friday afternoon, Sandy-related chatter was at 7.12, the company said. In comparison, the San Francisco Giants World Series win on Sunday night measured at 6.71 on Facebook.

On Twitter, Frankenstorm, FEMA for Federal Emergency Management Agency and New Jersey were among the top trending topics in the United States. Forecasters expected the hurricane's center to come ashore in southern New Jersey Monday evening.

Foursquare CEO Dennis Crowley reminded his more than 53,000 Twitter followers to "ALWAYS BE CHARGING." Millions of East Coasters could experience electric power and landline telephone outages. As a result, power-hungry smart phones, laptops and tablet computers may become only way to communicate.