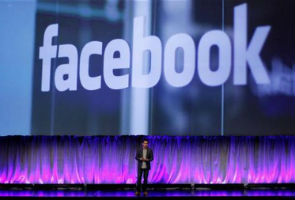 Highlights
Facebook's efforts to make its social network a friendlier place for businesses and popular brands are off to a strong start, the company said.

Eight million brands, from carmakers to rock bands, switched to Facebook's new Web page format 10 days after the revamped pages were introduced at a splashy launch event in New York last month, according to Facebook.

"If there's a specific message we want to drive, we know this guarantees we'll get in front of them," said Steve Baer, director of strategy at Code and Theory, a New York digital marketing agency that recently ran a paid promotion for Dr. Pepper using Facebook's new ads.

Facebook's moves to cozy up to big consumer brands is key to its efforts to boost revenue as the company prepares for an initial public offering that could value the 8-year-old company at up to $100 billion.

One of Facebook's most important challenges is convincing businesses to spend money advertising on its service rather than simply using the social network as a free promotional tool, analysts and industry observers say.

Facebook is aiming its new advertising services at well-known brands like Dr. Pepper, which has amassed more than 11 million "fans" of its Facebook page, but which hasn't done a lot of advertising on the social network, according to Baer.

Dr. Pepper Snapple Group paid to try a new type of Facebook ad that ensures that a post on its brand page will be promoted to its fans in multiple places on the social network.

The result, said Baer, was that the post reached 83 percent of Dr. Pepper's Facebook fans over a 28-day period. Dr. Pepper Snapple Group was allowed to use the new Facebook ad format before it was officially introduced to other advertisers two weeks ago and the level of user "engagement," such as users "liking" the post, was 80 percent higher than normal.

Investors, competitors and marketers are watching closely to see if Dr. Pepper's initial experience and enthusiasm for the new ads is matched by the millions of other big brands that have Facebook pages.

Facebook generated $3.7 billion in revenue in 2011, with 85 percent of the revenue coming from its advertising business.

In courting consumer brands and other businesses, Facebook is competing against the larger and more graphically rich "display" ad formats offered by websites such as Yahoo Inc , as well as against the popular Web search ads where Google Inc is the dominant player.

Facebook's revamped brand pages, which are available to businesses at no cost, offer companies more capabilities to create splashy, media-rich pages within Facebook. A chronological timeline on the right side of the page lets businesses create customized pages to showcase past milestones, and a new "offers" capability lets companies place coupons and promotions directly on their page.

Companies can offer the coupons on their Facebook page for free, as well as pay for the coupon to be seen by a larger audience on Facebook.

Einstein Bros Bagels, a restaurant chain owned by the Einstein Noah Restaurant Group , recently used a combination of Facebook's paid and free services to distribute a buy-one-get-one-free sandwich coupon and was impressed with the results.

"Taking someone who is online and getting them into a restaurant is a real challenge. This does it and at a better rate than other things we've done on Facebook did," said Brian Lambert, director of interactive marketing and loyalty at Einstein Bros.

But in a sign of the continuing challenges that Facebook is up against as it tries to attract more marketing dollars, Lambert acknowledged that spending on Facebook ads is a "small portion" of the company's total online ad spending. The bulk of Einstein Bros online ad budget currently goes to Web search ads from Google.

"Our strategy for (Facebook) is still evolving," he said.