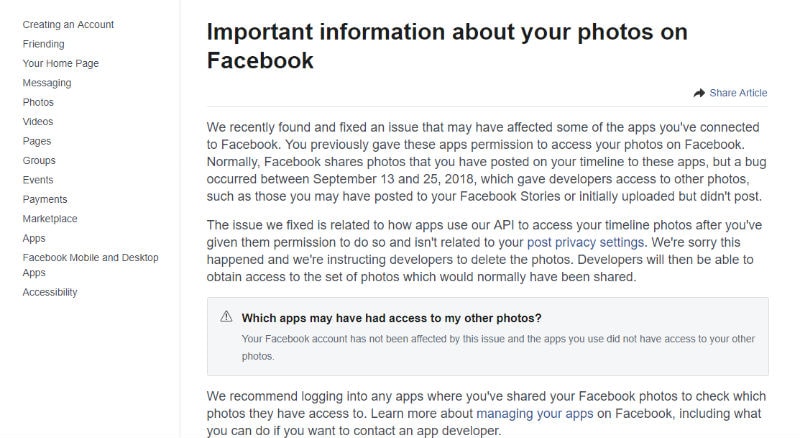 Last week, Facebook reported of a software bug that affected nearly 7 million users, and this bug may have exposed a broader set of photos to app developers than what those users intended. The company has confirmed that the faulty API issue has been fixed, and that it has also informed concerned third-party developers to delete the photos. Developers will then be able to obtain access to the set of photos which would normally have been shared. Additionally, the company has now also released a tool that will inform users if their data was compromised or not.

The new help page published by Facebook will warn users whether their account was compromised or not. This new page will require for you to be logged in to the social networking site. For users who haven't suffered during the data breach, the following message displays, "Your Facebook account has not been affected by this issue and the apps you use did not have access to your other photos."

For those affected, the page will list all the apps where your photos were exposed to. In any case, even if your account's photos have not been compromised, Facebook recommends logging into any apps where you've shared your Facebook photos to check which photos they have access to, and revoke it if too much information has passed through.

The company had earlier said that only those people who granted permission for third-party apps to access the photos were affected. Generally, when people give apps access to their photos, it means only photos posted on their Facebook page. Facebook says the bug potentially gave developers access to other photos, such as those shared on Marketplace or on Facebook Stories. The bug also affected photos that people uploaded to Facebook but chose not to post or could not post for technical reasons.

Facebook said that these users' photos may have been exposed for 12 days in September (between September 13 and 25) and that the bug was fixed.