After testing the new auto-play video with sound feature on Facebook, the company has now been spotted testing another feature in the News Feed. Apparently, this new feature collates all the big updates from your friends and family, and shows them in a separate box in the News Feed. The feature is called "What friends are talking about" and it relays all the missed updates from your friends and family since your last login.

This feature was spotted by a few users in the Android app, and no official confirmation has been given by Facebook about this feature. Mashable reports that the feature shows up a little bit down from the top of the News Feed, and it essentially collates all updates from friends.

The "What friends are talking about" feature shows up in a small dialogue box the size of your image post. It shows posts from your friends, and highlights the comments it has received. This feature looks to encourage conversations among users, and show missed updates back on top of the News Feed. 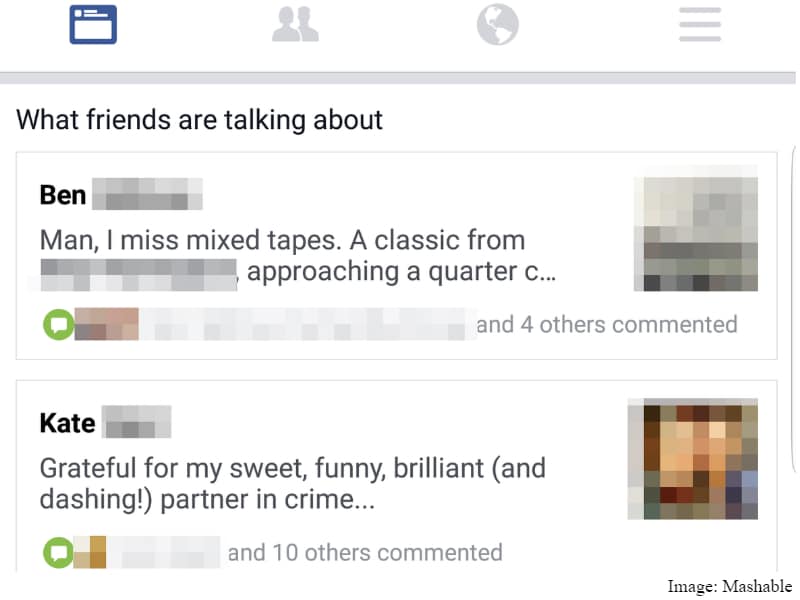 This feature is still in test mode, and there is no details on when (and if) it will launch commercially. Facebook is known for killing features in test mode, and this could be one of them as well. Facebook recently killed a Snapchat-like Quick Update feature in test mode itself, and decided to never launch it commercially. This new "What friends are talking about" feature seems to be heavily inspired by Twitter's "While you were away" feature that pretty much does the same thing.

Further reading: Facebook, News Feed, Social, Facebook Test Feature, What Friends Are Talking About
Tasneem Akolawala Email Tasneem
Tasneem Akolawala is a Senior Reporter for Gadgets 360. Her reporting expertise encompasses smartphones, wearables, apps, social media, and the overall tech industry. She reports out of Mumbai, and also writes about the ups and downs in the Indian telecom sector. Tasneem can be reached on Twitter at @MuteRiot, and leads, tips, and releases can be sent to tasneema@ndtv.com. More
Uttar Pradesh Government to Distribute 'Samajwadi Smartphones'