A long time after being infamous for imitating Snapchat with its Stories feature, Facebook is now set to upgrade it with a bunch of new features, including Save Photos and Videos, Voice Posts, and Stories Archive. These three new features are debuting first in India though will gradually be available all across the globe. The ultimate aim of the new development is to let people "connect in the moment with Facebook Stories", which will eventually make users adhere to the social networking platform.

Among other offerings, the Save Photos and Videos feature offers you a way to save photos and videos that you capture using the Facebook Camera. These memories can be seen right when you log into your Facebook account and help you save the storage on your smartphone. "The feature will allow you to save the photos and videos that you've captured through your Facebook Camera to a separate space from the rest of your shared photos so that other people can't see them," explained Connor Hayes, Director of Product Management, Facebook, in a select video conference in New Delhi on Wednesday. "This is going to be an option for people to save the photos that they might want to share later as well." 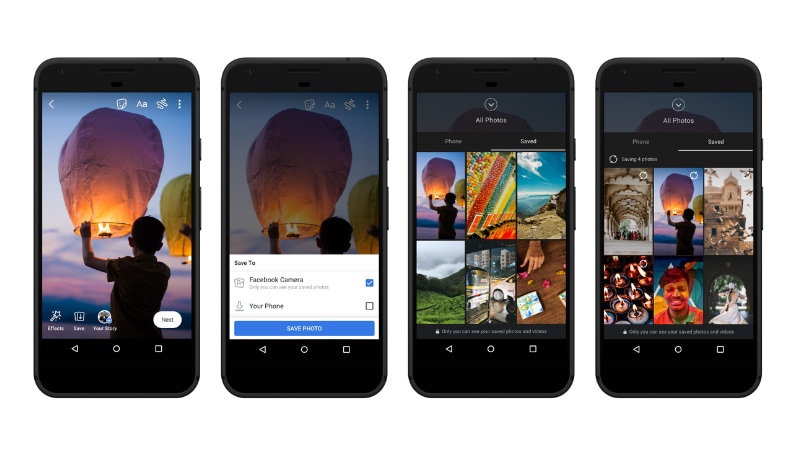 Notably, the feature to save photos and videos on the Facebook Camera is initially rolling out to Facebook for Android later this evening. There is no word on its arrival on Facebook Lite and for devices running iOS.

After the Save Photos and Videos feature, Facebook has added the ability to let you spread your voice through Voice Posts. This isn't something all new from the Menlo Park, California-headquartered company has it already offers voice messaging support to WhatsApp. However, it is certainly a fresh thing for Facebook users and is designed to let users start sharing their voice notes on the social networking platform. "The important thing that we've learnt from WhatsApp is that voice messaging is an increasingly popular way for people to communicate when they don't want to type up messages. For a lot of people, audio is a very important way for them to express themselves and communicate," said Hayes.

As the Voice Posts feature is highly inspired by voice messaging on WhatsApp, it works in a similar way. You need to move all the way over to the left to bring the Audio feature on the front and then tap and hold down the microphone button to record audio. Once the post is completed, you need to lift your finger to stop its recording. Facebook has also provided a dedicated screen that will appear after the recording is stopped to let you pick a background colour, background photo, text, doodle, or a sticker - matching the theme of your Voice Posts. Hayes told reporters that his team has also added several stickers representing different Indian cities. Furthermore, you can also pick photos from your phone's local storage. 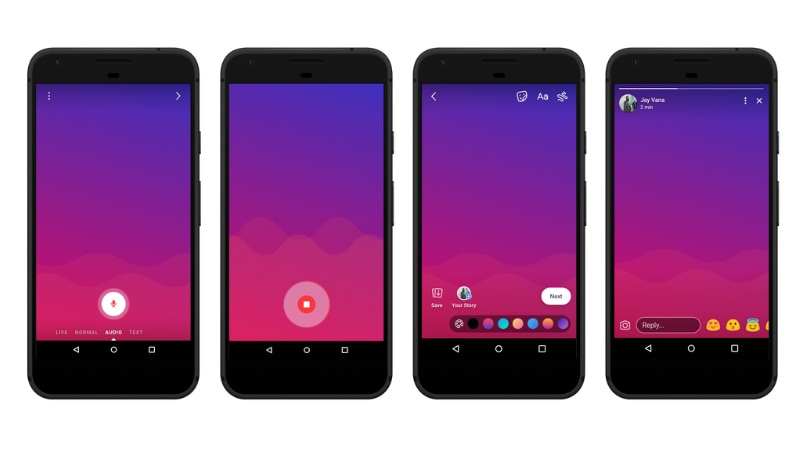 After completing the creativity with Voice Posts, you can share them on Facebook Stories or as a post on News Feed. A voice post on Stories can't be more than 20 seconds, while there is no limit for a voice post shared to News Feed. However, the recording time is restricted by the local storage available on the device.

Facebook is interestingly bringing its Voice Posts feature first to Facebook Lite users, though Android users on the regular Facebook app will see its availability in the coming months. There is no word on its availability on iOS.

The third new feature that Facebook has developed first for its users in India is the Stories Archive that, as its name suggests, lets you archive your Facebook Stories to reshare or re-post them on the social network. "It is a way for people to save the memories that they've shared to Stores," said Hayes.

"From talking to people in India and around the world, we've heard that people spend a lot of time in making stories creative with things like stickers and text. People thus want to keep these works of art and keep them for a longer time than a day," he added.

You'll need to tap the Archive button (looks like a small clock) that is located in the Stories section above your News Feed. After that, your Stories will be available to access at any time. You can also reshare them as a story or post it on News Feed. Further, you can also send one of your archived Stories to your contacts over Messenger. Facebook will also provide a disable Stories Archive option to stop Facebook from saving your old stories.

It is worth noting here that stories will be archived once they disappear from the Stories section after the standard 24-hour window passes. Also, an option to let users manually save their Facebook Stories to their camera roll after sharing was already available.

Hayes didn't provide any specific timeline for the availability of the new features in the global markets. Nevertheless, he said: "These are features that are rolling out first in India but eventually they will be broadly available."