Facebook Inc is giving the camera a central place on its smartphone app for the first time, encouraging users to take more pictures and edit them with digital stickers that show the influence of camera-friendly rival Snapchat. Alongside, it has unveiled Facebook Stories and Facebook Direct.

With an update scheduled to take effect on Tuesday, Facebook will allow users to get to the app's camera with one swipe of their finger and then add visual details like a rainbow or a beard of glitter.

As for Facebook Stories, users will be able to share multiple photos and videos as part of a visual collection on top of News Feed. These will be viewable for 24 hours, and will not be seen on the user's Timeline or News Feed unless the user posts them there. To add a story, users will need to click on the Your Story icon in the Stories bar on top of the News Feed.

Users will also be able to share a picture privately with a friend, rather than to the user's entire list of friends, using a feature called Facebook Direct. "When you send a photo or video via Direct, your friends will be able to view it once and replay it or write a reply. Once the conversation on the photo or video ends, the content is no longer visible in Direct," the company says in its blog post.

Snapchat, owned by Snap Inc, popularized the sharing of digitally decorated photographs on social media, especially among teenagers, and exposed a weakness of Facebook as the companies battle for eyeballs and leisure time.

Snap, which went public this month, has recently emphasized its ambitions to build gadgets and has called itself a camera company rather than a social media firm.

Facebook, the world's largest social network with some 1.86 billion users, denies it took its camera ideas from Snapchat and says it got them from Facebook users.

"Our goal here is to give people more to do on Facebook and that's really been the main inspiration," Connor Hayes, a Facebook product manager, said in a briefing with reporters.

In a glimpse of how the features could tie in with other businesses, one of the first camera effects will be the ability to morph someone in a photograph into a yellow, cartoon "Minion." The latest Minion movie, "Despicable Me 3," is due out in a few months from Comcast Corp's NBC Universal. 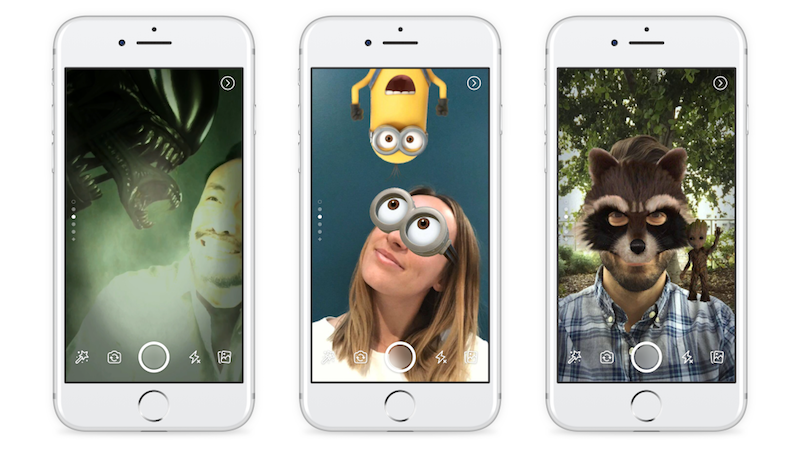 Another visual effect that can be added to pictures allows someone in a picture to "become a laser cat with super powers," Spilman said.

The effects will vary by location. Spilman said that when Facebook tested the ability to add the phrase "LOL" - the acronym for "laugh out loud" - to a picture, users in Ireland were confused by what it meant.

"We hope that with the new Facebook camera, Stories and Direct, it will be easier than ever to see the world through each other's eyes, and we can't wait to see the photos and videos you create," the company's blog post said.