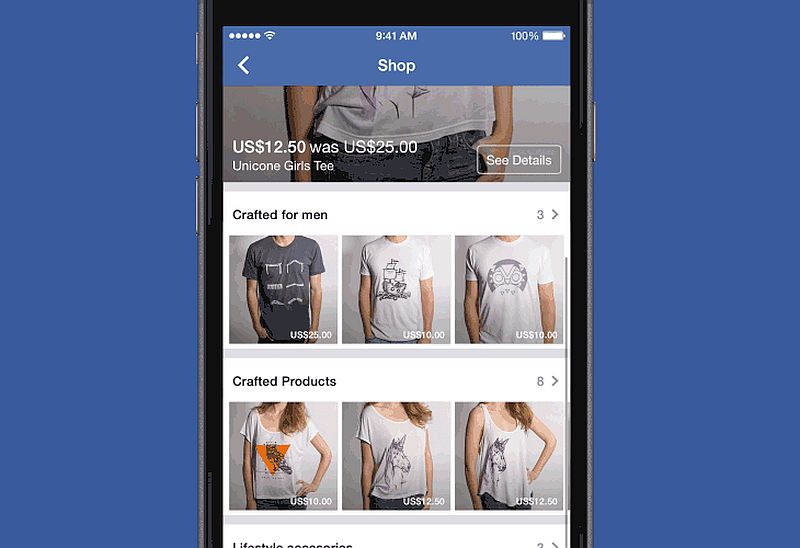 Facebook's move to become a go-to site for shopping apart from the regular socialising is finally reality now, with the feature being officially released to the general public for a wide variety of retailers. Additionally, Facebook is expected to launch its Facebook at Work out of beta by end of this year.

The social network has introduced Shop sections to Facebook Pages where consumers can actually buy products without leaving the platform, and also see a full catalogue of goods on offer, unlike the Facebook Store by Shopify. An e-commerce website solution, Shopify, has collaborated with Facebook to roll out the new section, and for now, the feature is only available to Shopify retailers.

Shopify announced the news via a blog post on Wednesday, and added that it has been working with the team at Facebook for over past few months for the Shop Section. The Shop Section on Facebook will make it easier for merchants to showcase products directly via their Facebook Page and even allow them [merchants] to direct shoppers to their online store or to checkout without leaving the Facebook site or mobile app. Facebook at this point is not taking a cut from shopping revenues.

The company on its blog post further details advantages of the new Shop Section, "Existing Facebook Store apps don't work on mobile devices, which is how most people now use Facebook. As well, existing Facebook Store apps only add a tab to your page, while the new Facebook Shop section appears as a larger section on your main Facebook Page. This means more people will be able to easily discover your products. Finally, the new Shop section includes a subscribe button that lets people get notified when you add new products."

Facebook's attempt at being one of the preferred channels to communicate with the team members at work might finally get a boost with the launch of a freemium version of the Facebook at Work by the end of this year.

Talking to Re/code, Julien Codorniou, Head of Facebook at Work, has confirmed that the service, which was introduced in January this year, will be out of the pilot program. The service is aimed at competing with other internal communication and collaboration services like Slack and Yammer.

Codorniou confirmed that over 100 companies have been using Facebook at Work in beta. "Many of those companies are just now starting to expand the product internally," said Codorniou.

Re/code points out that the company with Facebook at Work is likely to make some money; though it adds that not with the ad-dominant approach. "Instead, businesses will start with the free version and pay for extra features or analytics associated with their accounts," added Codorniou, like Slack. The company is still working on what features will be free and what will be paid.

Separately, a Facebook executive has said that the social platform in the near future will consist of video posts. "A year or two from now, we think Facebook will be mostly video," said Facebook's Head of Ad Product Ted Zagat. While speaking at a panel at Variety's event in Los Angeles on Wednesday, he added that virtual reality could be the next big thing after videos. Facebook has been lately pushing its video platform to take on the dominant YouTube in recent months.

In other news, the social platform has partnered with a UK charity Missing People to help find missing children. The Next Web reports that the partnership will see Facebook's geo-targeting tools being used for sending alerts to people who can help in the area.

"Alerts will only be issued if the National Crime Agency deems that the child's life is in danger," adds the report.