Facebook sends invites for a mystery event on June 20 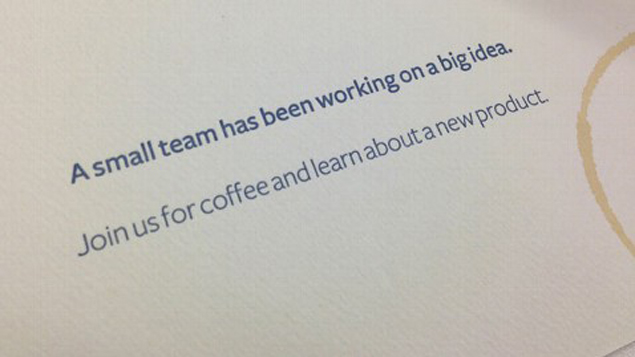 Facebook is set to launch a mysterious new product on June 20. The press invites for the event were sent not by email or any online medium, but rather through traditional postal mail.

The invite says, "A small team has been working on a big idea. Join us for coffee and learn about a new product." The corner of the invite has a coffee stain. All of this ties up to hint at what kind of a 'new big product' is still unknown. Clearly, the mysterious invite for the mysterious event, does not give us any major hints about what to expect.

Facebook had recently launched Twitter-like hashtags and while announcing the feature Greg Lindlay had said in a blog post that Facebook will be rolling out a series of features that would surface some of the interesting discussions people are having about public events, people, and topics. The features, Lindlay had said, will be aimed at creating simple ways to see the larger view of what's happening or what people are talking about. Perhaps, the new product might will tie into what the blog post had suggested.

One theory posed by TechCrunch is that Facebook could launch a news reader at the event. The website states that with lines of code hinting at "rssfeeds" that are appearing in Facebook's Graph API code, Facebook's very own RSS reader could perhaps be a highly probable possibility. If this is indeed true, then the announcement would be smartly timed with Google RSS reader scheduled to shut down on July 1.

While one can now click on hashtags and discover content, there's still no way to explore what is trending on the Facebook community. A new feature that works around exploring trends on Facebook similar to what we see on Twitter could also be a possibility. The coffee stain on the invitation still doesn't add up though.