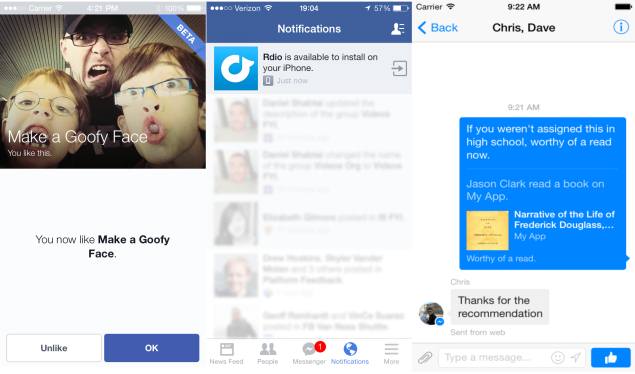 Facebook has announced a new 'Like button' to share content from third-party apps along with other changes on Wednesday at its f8 developers conference. The feature is currently on iOS in beta and the company notes that it hopes "to roll this feature out more broadly in the future."

At present the feature is only available to iOS third-party app developers and they can put 'Like Button' into their apps so that users can share content with their friends. Also some testers along with developers will be able to use it in beta.

Previously the action was supported to its Open Graph platform, but its new button taps directly into Facebook's own liking system.

Facebook on its official page explained that, "when the Like button is tapped, it will fast-app-switch to the Facebook app and present the Like dialog." Later it will return to the app and will update the like count along with displaying the 'Liked' state.

Other than that the social networking giant has also announced a new 'send to mobile' tool for developers. The tool will enable developers operating a website with a corresponding mobile app to let users discover and downloading the app, with a 'mobile install notification'. The tool requires users to use their Facebook Login to log onto the site, at which point they will be given a notification that a mobile app of the website is available, with users given the choice of having the link for the app sent to their phone.

"If your app is eligible for this feature, people who login to your website will see a checkbox within the login dialog asking them to 'Send a link to get (your-app) on your phone'," noted on Facebook's page.

Facebook made these and other announcements at its f8 developer summit, where it also introduced Anonymous Login, a user dashboard for control over data shared with third-party apps, and the Facebook Audience Network.
Comments