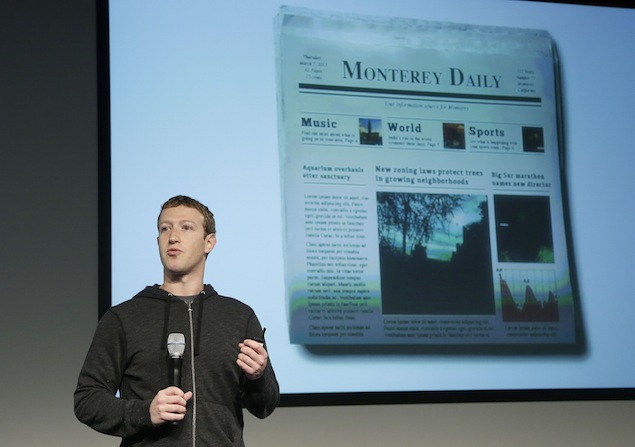 Facebook is trying to breathe new life into its social network with a redesign of its News Feed.

Amid complaints that company's site has become a jumble of monotonous musings and random pictures, the overhaul offers new controls that allow people to create streams of photos and other material in organized sections.

With the makeover, which began rolling out Thursday, Facebook CEO Mark Zuckerberg hopes to turn the News Feed into something more like a newspaper custom-made to suit the particular interests for each of the social network's more than 1 billion worldwide users.

With the new features users will be able to choose to see feeds that may feature nothing but photos or exclusively see posts from their closest friends, family members or favorite businesses. Or they can just peruse content about music, or sports, as if they were grabbing the section of a newspaper. Other newspaper-like changes will include lists of events that their social circles have flagged for the upcoming weekend and other summaries meant to resemble a table of contents.

By adding more personal touches, Facebook is acknowledged that the computer-generated formulas that it has been using to determine the content shown to each user have become less effective as the social circles within its network have widened to include a more diverse array of information.

"This gives people more power to dig deeper into the topics they care about," Zuckerberg said while discussing the makeover at Facebook's Menlo Park, California headquarters.

Facebook still intends to rely on algorithms to select some of material to feature on the main part of the News Feed, much like newspaper editors determine what goes on the front page.

More space on the News Feed's front page and other sections space will be devoted to pictures and video in recognition of how dominant those visual elements have become on Facebook as smartphones and tablet computers equipped with high-quality cameras have made it easier to share snapshots and clips.

About 50 percent of the posts on News Feed include a photo or video now, up from 25 percent in late 2011, Zuckerberg said.

The changes to News Feed are meant to make Facebook a more fun place to hang out and avoid turning into an Internet has-been like other once trendy social networks such as Friendster and MySpace.

Although Facebook's website remains one of the Internet's top destinations, there have been early signs that the social network is losing some of its pizazz, particularly among younger Web surfers who are starting to spend more time on other fraternizing hubs such as Tumblr, Pinterest and Instagram, a photo-sharing site that Facebook bought last year.

The phenomenon, known as "Facebook Fatigue," was recently documented in a report from Pew Research Center's Internet and American Life Project. The study found that about 61 percent of Facebook users had taken a hiatus for reasons that range from boredom to too much irrelevant information to Lent.

That's a worrisome trend for Facebook because it needs to ensure its audience keeps coming back so it can learn more about their interests and, ultimately, sell more of the advertising that brings in most of the company's revenue.
Comments

Amid chatter of 'Facebook fatigue', a new look News Feed on the way
Facebook shows off its redesign