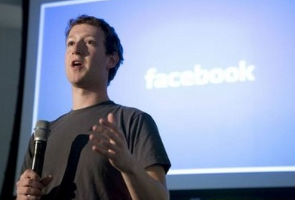 The social networking star custom-designed hardware, power supply, and architecture of a new US data center that is 38 percent more power efficient and costs 24 percent less than the industry average.

Schematics and designs for Facebook's revolutionary data center in the Oregon city of Prineville were made available to the world as part of an Open Compute Project announced by founder Mark Zuckerberg.

"We found a lot of stuff mass manufacturers were putting out wasn't what we needed, so we customized it to better fit social applications," Zuckerberg said during a press conference at Facebook's campus in Palo Alto, California.

"We are trying to foster this ecosystem where developers can easily build startups."
A shift to hosting software applications as services in the Internet "cloud" is driving enormous growth of data centers globally, according to Graham Weston, chairman and founder of US computer network hosting giant Rackspace.

"Facebook's design is really a leap forward, because it is much simpler, cheaper and greener," Weston said. "I think it's the biggest reduction in server infrastructure cost in a decade."

San Francisco-based social game sensation Zynga is looking to use Facebook's technology in its data centers, which host popular online games such as "FarmVille" and "Zynga Poker."

"We think it is going to make a big difference in how we bring play to the Internet," Zynga chief technology officer Allen Leinwand said while taking part in the Facebook press conference.

"It should be fun for people to play on the Internet, but you need a lot of infrastructure behind that," he said. "We are really intrigued by what is going on here.

The power efficiency gains of the Open Compute Project design promises to shave millions of dollars off the electricity bill of a typical large data center, according to Weston.

If a quarter of the data centers in the United States switched to the new model it would save enough energy to power more than 160,000 homes, Facebook estimated.

"It's time to stop treating data centers like 'Fight Club' and demystify what is going on in there," Facebook vice president of technical operations Jonathan Heilinger said in a playful reference to a film based on secret gatherings for bare-knuckle matches.

Other Internet firms such as Google build their own data centers, but haven't made designs freely available as Facebook has at the website open compute.org.

Developing countries where outdated and inefficient data centers are common could be prime beneficiaries of thefree Facebook technology.

India, China and other countries are racing into an Internet Age that demands data centers, Dell's Norrod noted.

"There will be the opportunity for Internet companies in the developing world to take a leap forward, jumping over the past 15 years of learning," Norrod said. "That's going to happen."

Computer makers Dell and Hewlett-Packard along with chip companies Intel and Advanced Micro Devices worked with Facebook to develop the data center technology.

Facebook engineers hoped to get feedback and ideas to improve the designs.

"It is like the launch of the (Toyota) Prius, only you gave people the plans on how to make the Prius," said Intel data center group general manager Jason Waxman. "There are a lot of places around the world that could benefit from this kind of information."
Comments