The unintended exposure of Facebook data to third-party JavaScript trackers is not owing to a bug in the Login With Facebook system. "Rather, it is due to the lack of security boundaries between the first-party and third-party scripts in today's Web," said the report prepared by Steven Englehardt, Gunes Acar and Arvind Narayanan, researchers at Freedom to Tinker - a digital initiative by Princeton University's Center for Information Technology Policy.

"We report yet another type of surreptitious data collection by third-party scripts that we discovered: the exfiltration of personal identifiers from websites through "Login with Facebook" and other such social login APIs," the trio wrote.

Meanwhile, Facebook told TechCrunch that it is investigating the security research report.

The researchers found two types of vulnerabilities: Seven third parties abusing websites' access to Facebook user data and one third party using its own Facebook "application" to track users around the Web.

"We've uncovered an additional risk: when a user grants a website access to their social media profile, they are not only trusting that website but also third parties embedded on that site," the report noted.

The researchers found seven scripts collecting Facebook user data using the first party's Facebook access. These are OnAudience, Augur, Lytics, ntvk1.ru, ProPS, Tealium, and Forter. Of these, OnAudience was said to have stopped collecting data after an earlier report by the researchers.

"These scripts are embedded on a total of 434 of the top 1 million sites, including fiverr.com, bhphotovideo.com, and mongodb.com," they wrote.

We confirmed that the Forter scripts embedded on fiverr.com and bhphotovideo.com do NOT include functionality to access Facebook data. On mongodb.com we only observed the presence of an Augur script. We have published an updated list of sites, marking the ones where we have confirmed the presence of functionality to access Facebook data.

The user ID collected through the Facebook API is specific to the website (or the "application" in Facebook's terminology), which would limit the potential for cross-site tracking.

"But these app-scoped user IDs can be used to retrieve the global Facebook ID, user's profile photo, and other public profile information, which can be used to identify and track users across websites and devices," the researchers warned. 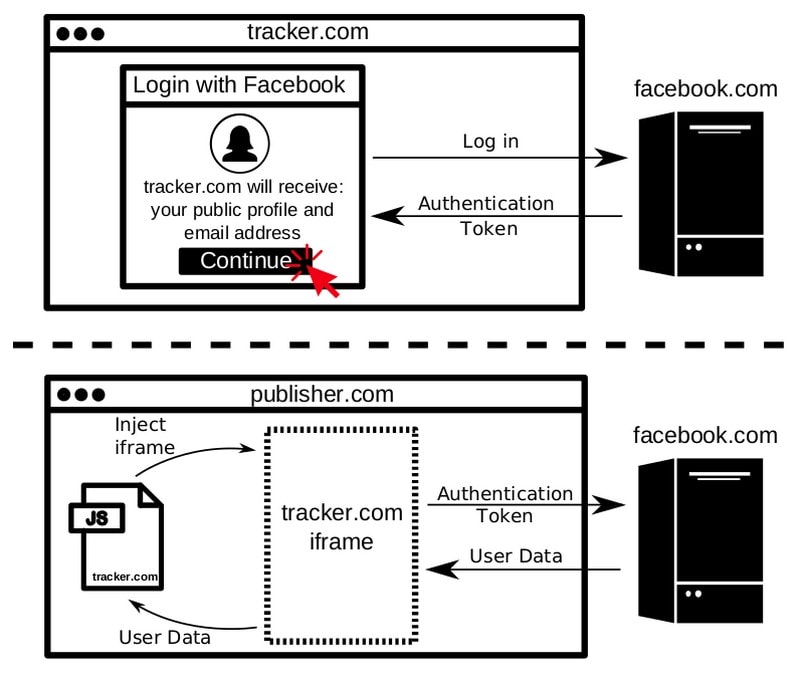 "While we can't say how these trackers use the information they collect, we can examine their marketing material to understand how it may be used," they noted.

OnAudience, Tealium AudienceStream, Lytics, and ProPS all offer some form of "customer data platform", which collect data to help publishers to better monetise their users.

"This is a privacy violation, as it is unexpected and users are unaware of it," the researchers said.

There are steps Facebook and other social login providers can still take to prevent abuse.

"API use can be audited to review how, where, and which parties are accessing social login data. Facebook could also disallow the lookup of profile picture and global Facebook IDs by app-scoped user IDs," the report emphasised.

"It might also be the right time to make Anonymous Login with Facebook available following its announcement four years ago," the researchers added.