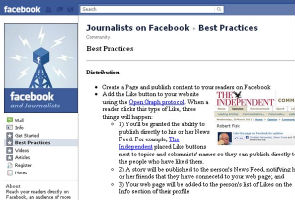 Highlights
Facebook has launched a media resource page to help journalists use the social network as a reporting tool and better connect with their audience.

The "Journalists on Facebook" page is intended to be "an on-going resource for the growing number of reporters using Facebook to find sources, interact with readers, and advance stories," Justin Osofsky, Facebook's director of media partnerships, said in a blog post.

"The page will provide journalists with best practices for integrating the latest Facebook products with their work and connecting with the Facebook audience of more than 500 million people," Osofsky said.

Facebook has been working with journalists since early 2010 to help make their content more social and Osofsky said the average media organization has seen referral traffic from Facebook soar over 300 per cent since then.

It said the first one will be held on April 27 at Facebook headquarters in Palo Alto, California.

Within hours of going up, the Journalists on Facebook page had received nearly 2,300 "likes."