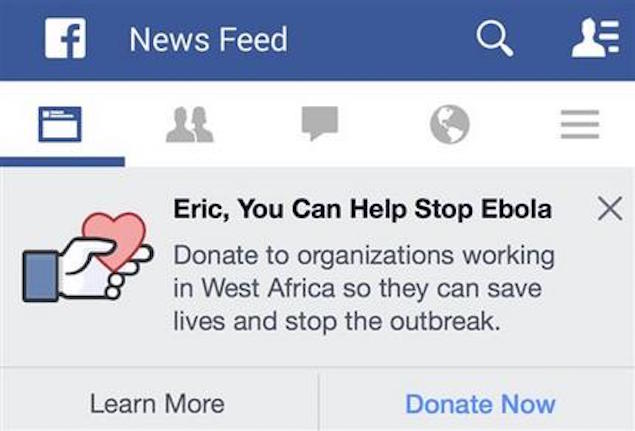 Facebook is stepping up its efforts to fight Ebola by adding a button designed to make it easier for its users to donate to charities battling the disease.

The social media company is also donating and deploying 100 satellite communication terminals to boost Internet and phone services to affected areas in West Africa, where the disease has killed nearly 5,000. The programs come on the heels of a $25 million donation last month by CEO Mark Zuckerberg and his wife, Priscilla Chan, to the Centers for Disease Control and Prevention toward the Ebola response.

Facebook Inc. says that, over the coming week, its users will see an option to donate to three nonprofits fighting Ebola. The groups are the International Medical Corps, the International Federation of Red Cross and Red Crescent Societies, and Save the Children. Facebook says it chose charities that work directly on the ground and are able to accept money globally.

The Menlo Park, California company says the terminals will provide Internet and voice-calling access to remote areas of Guinea, Liberia and Sierra Leone so that medical aid workers can get access to voice and data services. The devices will also help people with Ebola who have been placed in isolation communicate with their families, and health workers who've traveled to Africa keep in touch with friends and family back home, said Chris Weasler, Facebook's head of spectrum policy and connectivity planning, in an interview from Ghana.

"These units will provide connectivity in places where there is no coverage," he said. Ebola treatment units are being set up where the disease pops up, and not necessarily where there is already Internet coverage. "In other cases, (they will be) adding more capacity to networks increasingly strained from the influx of responders," he added.

Facebook is hoping that its donation button will increase the money going toward Ebola response efforts. Ebola aid donations have lagged behind large natural disasters such as Typhoon Haiyan in the Philippines last year or the earthquake in Haiti four years ago.

So far, the American Red Cross has raised nearly $3.7 million for Ebola relief. In comparison, it received $486 million after the Haiti earthquake and more than $88 million in the aftermath of Typhoon Haiyan.

"We need to get Ebola under control in the near term so that it doesn't spread further and become a long term global health crisis that we end up fighting for decades at large scale, like HIV or polio," Zuckerberg wrote on his Facebook page last month.
Comments