Facebook has silently added an option to its iOS app that pushes users to install a VPN client called Onavo Protect on their devices. The option, which comes under the title ‘Protect’, redirects users directly to the Onavo Protect app’s listing on the App Store. Interestingly, Facebook reportedly acquired Onavo Protect back in 2013, and the ultimate aim of the hidden redirection is found to collect and analyse user data. The latest development emerges amid the allegation raised against the social networking giant for using personal data of its users without securing their informed consent. A Berlin regional court had ruled that the company uses personal user data illegally for the purpose of enabling micro-target online advertising.

In a statement to TechCrunch, Facebook has acknowledged that it had recently started rolling out the Onavo Protect app access directly from its iOS app. “We recently began letting people in the US access Onavo Protect from the Facebook app on their iOS devices. Like other VPNs, it acts as a secure connection to protect people from potentially harmful sites. The app may collect your mobile data traffic to help us recognise tactics that bad actors use. Over time, this helps the tool work better for you and others. We let people know about this activity and other ways that Onavo uses and analyses data before they download it,” said Erez Naveh, Product Manager at Onavo in the statement. We’ve separately verified the presence of the Protect option on the Facebook app installed on one of our iOS devices in India. 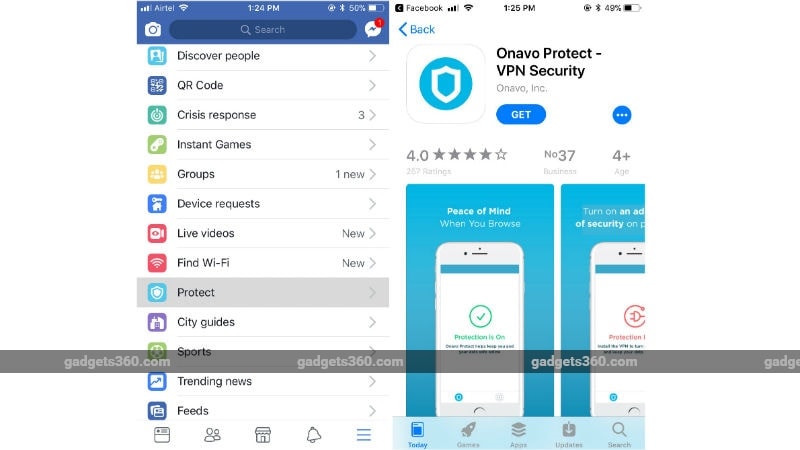 It is unclear how Facebook is planning to leverage the user data it will collect through the Onavo Protect app. However, the app description on the App Store confirms that alongside establishing a “secure connection to direct all your network communications through Onavo’s servers”, the app does help Facebook improve its products and services using the mobile data traffic it collects from its users. “Because we’re part of Facebook, we also use this info to improve Facebook products and services, gain insights into the products and services people value, and build better experiences,” the description reads.

As TechCrunch’s Sarah Perez notes, this isn’t the first time when the Facebook app is making way for the Onavo Protect app. TheNextWeb Social Media Director Matt Navarra spotted the Protect option in December 2016. Further, the option has reportedly been available on the Android app around the same time. We weren’t able to find the same on our Android devices, though.

We’ve reached out to Facebook for more clarity on the Onavo Protect app access and will update this space accordingly.

The data available with app insights firm Sensor Tower reveals that the Onavo Protect app has so far received more than 33 million installs across iOS and Android devices and around 62 percent of those are from Google Play. This suggests why Facebook has opted the new push on its iOS app.

Historically, Facebook has attempted to integrate its apps mainly to encourage users to use offerings in addition to its social network and instant messaging models. The company last year provided a shortcut to Instagram right from the Facebook app. Earlier this year, the Mark Zuckerberg-led team also ran a small test to let its users post their Instagram Stories directly to WhatsApp Status.