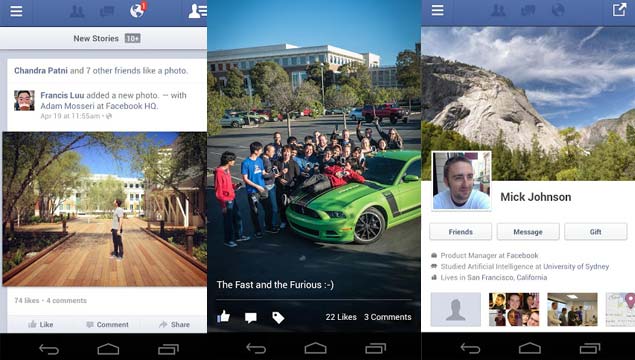 Facebook has moved further away from HTML5 after releasing a native version of its Android app.

Facebook for Android version 2.0 has been built from scratch leveraging native Android controls, as compared to previous versions of the app which were built using HTML5.

While HTML5 offers cross-platform compatibility which means you can use the same code across various platforms like Android and iOS but its overall performance and integration cannot match that of apps using controls native to the platform.

Speed - more than anything else - is the reason Facebook switched from the old HTML5 iOS app to a new native app back in August. Now it has done the same on the Android platform. Facebook claims the new app "is twice as fast when looking at photos and opening your Timeline and noticeably quicker to launch".

Facebook has been talking about mobile as a key area of focus since its IPO earlier this year and native apps for the two major mobile platforms is definitely a step in the right direction.