Facebook on day 1 of its annual F8 developer conference on Tuesday announced an expansion of its blood donation initiative launched back in October last year, with the new creation of a new Blood Donation hub that will make it easier to find opportunities to donate blood nearby. Users in Bangladesh, India, and Pakistan will in a few weeks be able to view nearby blood donation camps, user requests for donations, and blood bank locations from a single place. The company also announced its Crisis Response centre is getting a new feature that will enable users to share first-person accounts.

The Menlo Park, California giant's Blood Donations initiative in the three South Asian countries was launched last year with an aim to connect donors to those in need of 'safe blood' by putting Facebook's extensive coverage in the countries to good use. Since launch, Facebook is said to have been working with non-profit organisations, health industry experts, and potential donors to create a trusted and genuine platform.

During the keynote, Facebook said that there are currently 8 million registered blood donors in India, Pakistan, and Bangladesh (combined) on its platform, making it the largest online blood bank database for the region. 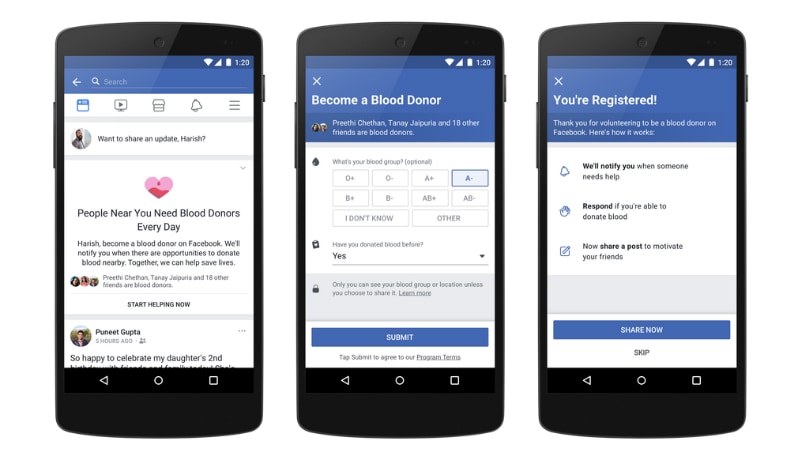 As per previous reports, the new update might allow individuals and organisations looking for blood to create custom posts that can directly reach blood donors registered on Facebook's platform. To register yourself as a donor, you can search for "become a blood donor" on the Facebook app and enter details like your blood group and donation history in the Facebook shortcut with the same name. Once done, you will be offered the option to invite friends and respond when help is required.

"We know that donors want to step up to help their community, but often don't know when or where to donate," said Facebook in a blog post emphasising the gap between supply and demand and aiming to organise the blood donation sector in India and its two neighbouring countries - Pakistan and Bangladesh.

As for the Crisis Response centre's new feature, the company said users affected by a crisis will be able to post first-hand accounts of "timely information, like road closures and damage photos and videos", meant to make it easier for others to get real-time updates. This feature will be rolling out later this year.

Talking about other announcements at the F8 developer conference this year, Facebook is launching a new dating service within the social media app that claims to matchmake millions of people on the platform. Apparently, the dating service will not match users with people from within their friend list.