Facebook has come under criticism for not doing enough to filter out phoney political ads. 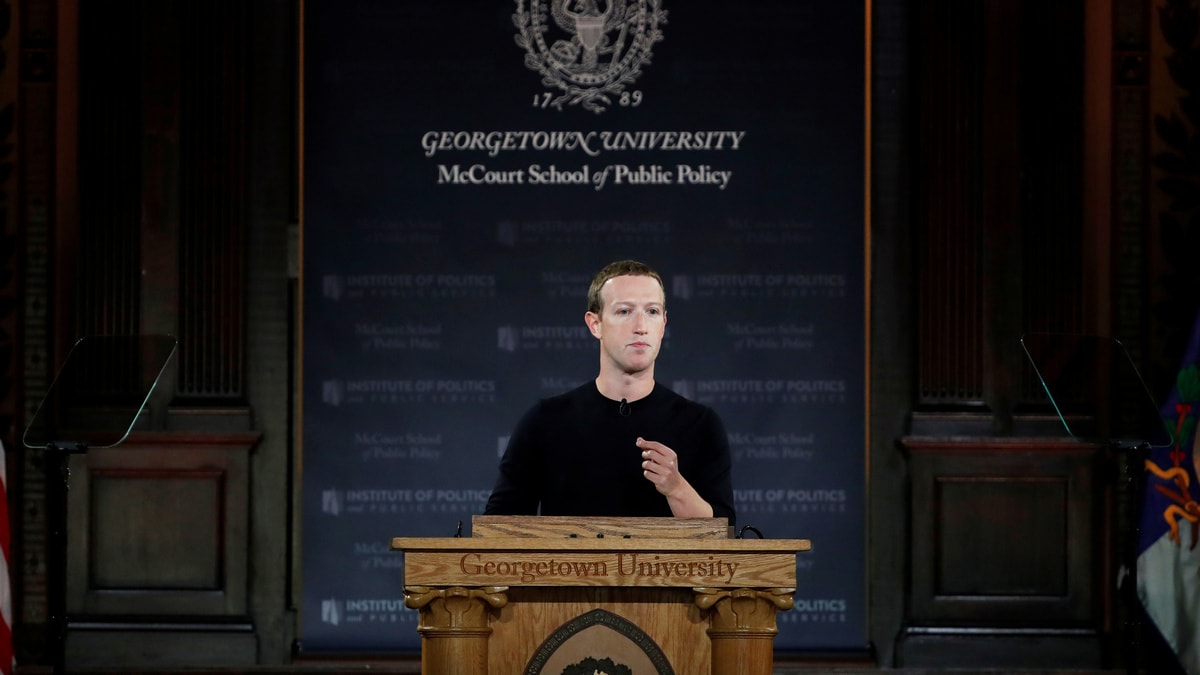 Facebook CEO Mark Zuckerberg on Thursday defended the social media platform's refusal to take down content it considers newsworthy "even if it goes against our standards." But while he promoted free expression, limitations were place on coverage of his remarks at Georgetown University.

Reporters were not allowed to ask questions — only students were given that chance, filtered by a moderator. Facebook and Georgetown barred news organisations from filming. Instead organizers provided a livestream on Georgetown's social media site and made available video shot by Facebook.

"It's quite ironic," said Sally Hubbard, director of enforcement strategy at the Open Markets Institute and a former state prosecutor. More generally, she said of Facebook, "The key to free expression is to not have one company control the flow of speech to more than 2 billion people, using algorithms that amplify disinformation in order to maximize profits."

Facebook, Google, Twitter and other companies are trying to oversee internet content while also avoiding infringing on First Amendment rights. The pendulum has swung recently toward restricting hateful speech that could spawn violence. The shift follows mass shootings in which the suspects have posted racist screeds online or otherwise expressed hateful views or streamed images of attacks.

Facebook also has come under criticism for not doing enough to filter out phoney political ads.

"Right now, we're doing a very good job at getting everyone mad at us," Zuckerberg told the packed hall at Georgetown.

He said serious threats to expression are coming from places such as China, where social media platforms used by protesters are censored, and from court decisions restricting the location of internet users' data in certain countries.

"I'm here today because I believe that we must continue to stand for free expression," he said. People of varied political beliefs are trying to define expansive speech as dangerous because it could bring results they don't accept, Zuckerberg said. "I personally believe this is more dangerous to democracy in the long term than almost any speech."

Taking note of mounting criticism of the market dominance of Facebook and other tech giants, Zuckerberg acknowledged the companies' centralized power but said it's also "decentralised by putting it directly into people's hands. ... Giving people a voice and broader inclusion go hand in hand."

John Stanton, a former fellow at Georgetown who heads a group called the "Save Journalism Project," called the CEO's appearance "a joke."

Zuckerberg "is the antithesis of free expression," Stanton said in a statement. "He's thrown free speech, public education and democracy to the wayside in his thirst for power and profit."

The social media giant, with nearly 2.5 billion users around the globe, is under heavy scrutiny from lawmakers and regulators following a series of data privacy scandals, including lapses in opening the personal data of millions of users to Trump's 2016 campaign.

Facebook and other social media platforms have drawn accusations from President Donald Trump and his allies that their platforms are steeped in anti-conservative bias.

Zuckerberg recently fell into a tiff with Sen. Elizabeth Warren, a leading Democratic presidential candidate, who ran a fake political ad on Facebook taking aim at the CEO. Warren has proposed breaking up big tech companies. With the phony ad, she was protesting Facebook's policy of not fact-checking politicians' speech or ads in the same way it enlists outside parties to fact-check news stories and other posts.

"We think people should be able to see for themselves," Zuckerberg responded Thursday on the fact-checking issue. "If content is newsworthy, we don't take it down even if it goes against our standards."

A spokesman for Biden said Zuckerberg's speech was an effort "to cloak Facebook's policy in a feigned concern for free expression."

"Facebook has chosen to sell Americans' personal data to politicians looking to target them with disproven lies and conspiracy theories, crowding out the voices of working Americans," campaign spokesman Bill Russo said in a statement.

Several of the students' questions to Zuckerberg at Georgetown pointed up the conflict. One asked, if Facebook supports free speech, "why is conservative content disproportionately censored?" But another asserted that the policy of not fact-checking political ads is pro-conservative.

"I think it would be hard to be biased against both sides," Zuckerberg replied, smiling.

Asked about the handling of questions, Facebook spokeswoman Ruchika Budhjara said, "They were submitted by students as they walked into the room. And they're being picked at random by Georgetown."