This is not the first time Tesla CEO has changed his Twitter name. 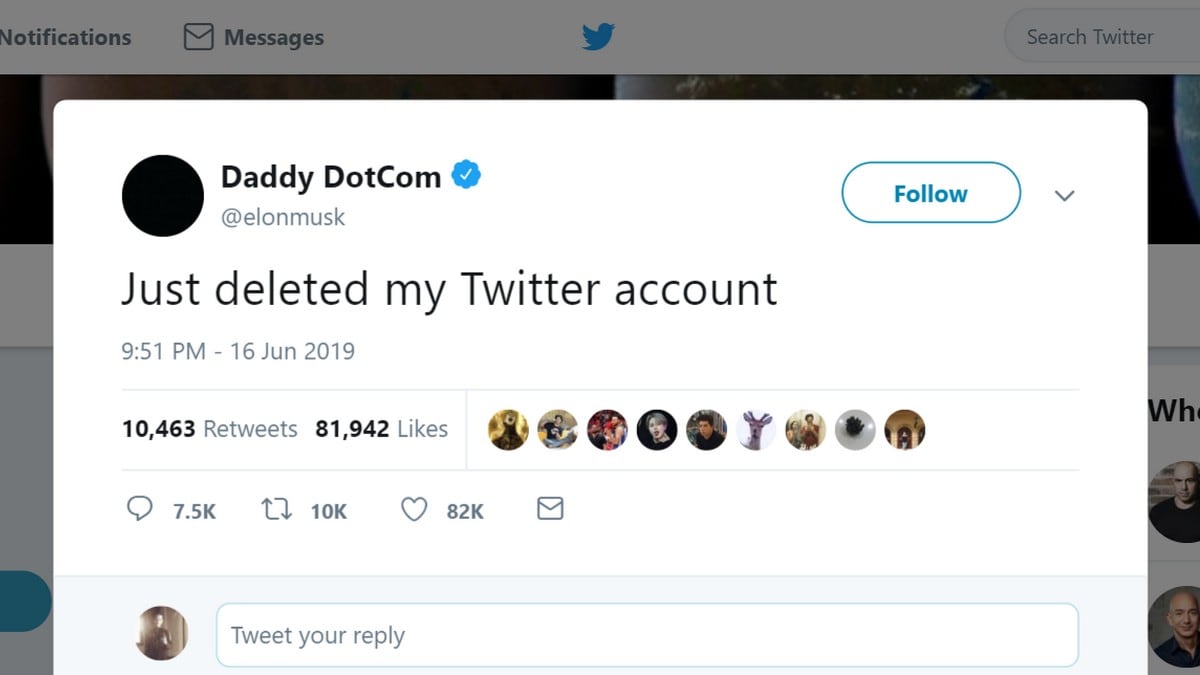 Tesla shareholders are not particularly fond of Elon Musk's social media antics. Well, it appears that he is unlikely to change anytime soon. The Tesla chief announced a few hours ago that he has deleted his Twitter account. Sounds crazy, and a little disappointing for fans of Musk and his charisma? Well, despite saying so, Musk did not delete his Twitter handle, but he simply changed the username. And, the name change is bizarre, as the good ol' Elon Musk has gone in favour of Daddy DotCom. Yes, Daddy DotCom is now the Twitter display name of Elon Musk.

Musk, who has north of 27 million followers on Twitter, tweeted a few hours ago –“Just deleted my Twitter account”. But he didn't give any reason why. Scores of Musk's followers spiralled into a frenzy of reactions ranging from surprise and disappointment to joy and confusion. But the account deletion never materialised, as Musk simply change his username from ‘Elon Musk' to ‘Daddy DotCom'. He also changed his profile photo, ditching the photo of an astronaut sitting on a car in favour of a pitch black image.

The account deletion claim and the username tweak are a little bizarre, but Musk is no stranger to leaving people flummoxed. Just yesterday, Musk shared an artwork via his Twitter account without crediting the artist. And when asked to do so, he flat out refused and argued that crediting an artist on Twitter is destroying the medium. Musk followed it all up by deleting the entire conversation, but not before a few screenshots were captured.

Musk recently hired renowned meme-maker Adam Koszary as the social media manager for Tesla, and was also set to go on trial after he labelled a British rescue diver as a paedophile and child rapist. The Tesla's chief's Twitter usage is apparently a cause of major friction between him and US Securities and Exchange Commission (SEC), even leading to a long-drawn-out tiff that eventually led to a court-supervised deal between Musk and the US SEC over his use of Twitter.