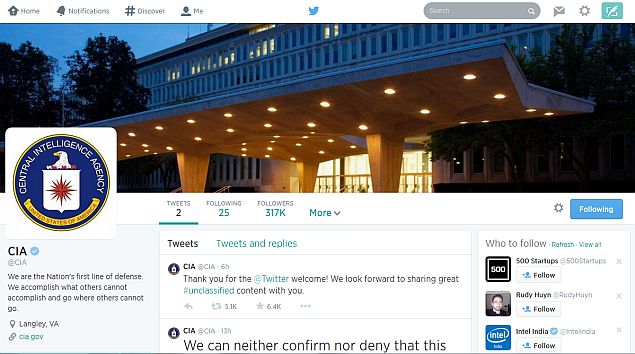 The secretive US spy agency joined the world of social media Friday, and quickly had the Twitterverse talking.

"We can neither confirm nor deny that this is our first tweet," the Central Intelligence Agency quipped on its newly minted official Twitter page.

We can neither confirm nor deny that this is our first tweet.

The Twitter Government and Politics team welcomed the posting with a #BestPractice hashtag for being "creative with your first tweet."

CIA director John Brennan said in a statement that the new Twitter and Facebook accounts aimed to help the agency "more directly engage with the public and provide information on CIA's mission, history and other developments."

Instead, it plans to post its rare press releases, information about careers within the agency or about historic missions that have since been declassified.

The agency will also post images of objects on display at the CIA museum, which it called "the best museum most people never get to see" - because it's closed to the public.