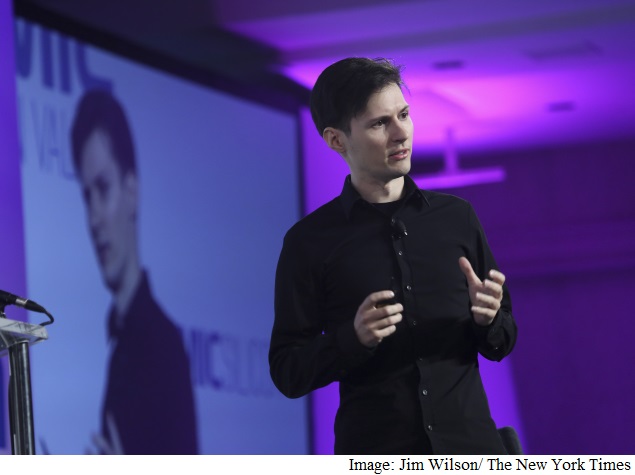 When a SWAT team appeared at Pavel Durov's door in St. Petersburg, he started thinking about his future in Russia.

He was home alone, and he peered at them through a monitor.

"They had guns and they looked very serious," said Durov, once Russia's biggest celebrity entrepreneur. "They seemed to want to break the door."

Not long ago, Durov, 30, was seen as Russia's Mark Zuckerberg. He founded a social network, VKontakte, which is more popular in Russia than Facebook, and made a splash by publicly offering Edward Snowden a job.

Then the Kremlin tightened its grip over the Internet and President Vladimir Putin's allies took control of VKontakte. Durov eventually sold his remaining stake for millions and fled Russia in April, after resisting government pressure to release the data of Ukrainian protest leaders.

Durov, known for his subversive wit and an all-black wardrobe that evokes Neo from the "Matrix" movies, is now a little-seen nomad, moving from country to country every few weeks with a small band of computer programmers. One day he is in Paris, another in Singapore.

"Me myself, I'm not a big fan of the idea of countries," Durov said, wearing a custom-made cross between a hoodie and a sport coat.

When he arrived with little warning in London for his first interview outside cyberspace since leaving Russia, he was en route to San Francisco, where he appeared at a technology conference on Tuesday. He is surfacing to showcase his new messaging app, Telegram, for people craving privacy and security.

His odyssey reflects the changing nature of the Internet in Russia.

The Internet was once seen as a way to diversify Russia's economy beyond oil. When VKontakte started in 2006, Durov says, he envisioned his country as a tax-free and libertarian utopia for technologists.

"The best thing about Russia at that time was the Internet sphere was completely not regulated," he said. "In some ways, it was more liberal than the United States."

Now the Internet is viewed with suspicion by Putin, who has called it a "CIA project" and has taken steps to insulate Russia from the rest of the digital world. One leading Russian activist recently said the government was on a "campaign to shut down the Internet."

"Since I'm obviously a believer in free markets," Durov said, "it's hard for me to understand the current direction of the country."

Russia's economy is also increasingly isolated, with its currency plummeting amid Western sanctions. The government is now predicting a recession for next year. Putin's big challenge is falling oil prices, which Durov calls "the only chance" for economic and political reform.

"When the petrol prices are high, there is no incentive for those reforms," he said. "It can stay like this forever; nobody really cares."

As the tensions in Russia play out, Durov says he is focused on Telegram, which he started last year.

There will be no outside investors, he says, no ads and no marketing, and it is available free, though he is likely to eventually charge for additional services. He says he has about 50 million users, almost entirely outside Russia.

While he is soft-spoken, his rebellious humor has gotten him in trouble, as he will be the first to admit.

In 2011, the government demanded he shut down the pages of opposition politicians after controversial parliamentary elections. He responded by posting to Twitter a picture of a dog with its tongue out and wearing a hoodie. During the standoff with the SWAT team, which took place soon after, he wouldn't answer the door. They went home after an hour.

Then there was Victory Day in 2012, when Russia celebrates the defeat of the Nazis. He posted on Twitter that "67 years ago Stalin defended from Hitler his right to suppress Soviet people."

It created an outcry at a time of rising nationalism.

Durov grinned."It was a disaster."

A few weeks later, he and other VKontakte executives folded 5,000-ruble notes - worth about $155 at the time - into paper airplanes and threw them out an office window, sparking a fight in the street below.

He said that from his vantage point he couldn't see what was happening on the street and stopped when he was told people were fighting.

Durov has also described himself, with tongue in cheek, as a Pastafarian, a quirky atheistic 'faith' that can involve wearing a colander on your head.

"I like to make fun of serious matters," he says, adding that he's closer to a Taoist or Buddhist. "I'm a peaceful creature; I'm vegetarian. I don't like wars."

By 2013, the government was bearing down. He was aggressively prosecuted for a disputed hit-and-run involving a traffic officer, which Durov says never happened. At the same time, he learned 48 percent of VKontakte had been sold to allies of Putin, despite a contractual requirement to give him right of first refusal.

Durov learned programming from his brother, Nikolai, a mathematician and Durov's right-hand man at VKontakte and Telegram. By 11, the younger Durov was coding his own versions of games like "Tetris." The two developed a strategy game set in ancient China, which they called "Lao Unit."

The posters said things like "You are surrounded, surrender, there's no hope," or they would suggest to foreign soldiers that "some other guy is entertaining himself with your wife," he recalled.

His main interest was developing a social network. A friend who studied in America showed him Facebook, then in its infancy, and he learned from it.

"Some things like the layout of the early VKontakte was very influenced by Facebook," Durov said. "Otherwise it could take ages for me to build, and I was not a professional designer."

He also recruited fellow linguistics students to build a database catering to the post-Soviet university system, a step he said gave VKontakte "a tremendous competitive advantage."

In 2007, he decided to allow users to upload audio and video files, without regard to copyright. Such policies have drawn criticism from the U.S. Trade Representative and lawsuits from major record labels.

"Some people told me when I was implementing it that I would go to jail the next day," he said. "I was very careless."

Demonstrations in 2011 over parliamentary elections resulted in a government showdown. During the SWAT standoff at his home that followed, he called his brother.

"I realized I don't have a safe means of communications with him," he said, adding, "That's how Telegram started."

Telegram is competing in a crowded field of messaging apps that promise varying degrees of security. Telegram has its fans and detractors, but it was rated respectably in a recent evaluation by the Electronic Frontier Foundation. The Telegram company, based in Berlin, has a deliberately complex structure of scattered global shell companies designed to keep it a step ahead of subpoenas from any one government.

"This is very unusual for Russian entrepreneurs, to succeed outside of Russia," said Sergei Guriev, a prominent economist who fled Russia last year. "He may not be a usual person in many ways, but he is definitely a very talented entrepreneur."

When Durov sold his stake in VKontakte last December, there was speculation it was worth a few hundred million dollars. Durov would not give a specific figure, citing a nondisclosure agreement.

"In my days in Russia, I visited some very rich guys," he said. "I visited big ships, private airplanes, houses - and I know for sure I don't want this for myself."

"I'm very happy right now without any property anywhere," he added. "I consider myself a legal citizen of the world."