Alone, together: Snowed in, in the age of hashtags 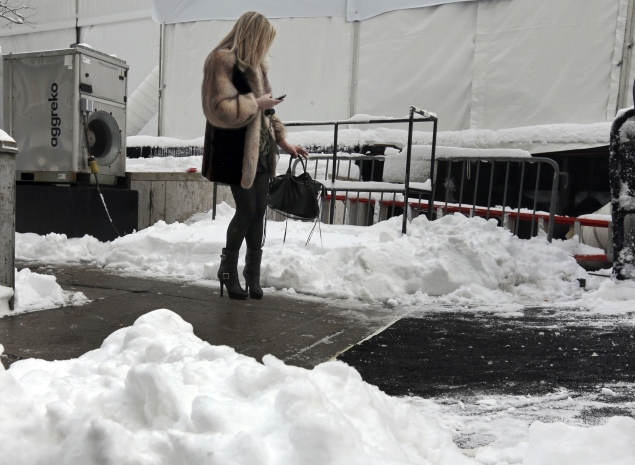 The East Coast woke up under a blanket of snow this weekend and collectively documented the experience on the myriad social and mobile inventions of the past decade. Facebook, Twitter and other technologies make it increasingly difficult to stay isolated -even if you're stuck home alone.

"The funny thing is that I actually checked my Instagram feed before I even looked out my own window," says Eric Witz, who lives in Medford, Mass.

On Saturday, Witz posted a photo of his car stuck under a "6-foot-high snow drift". "I always have my phone on me. So checking these things is something I do instinctively when I wake up," he says. "That probably makes me a sad social media cliche, but it's the truth."

As Northeasterners posted photo after photo of kids sledding in Central Park and suburbanites conquering Mt. Snowmore with their shovels, West Coast wags teased with tweets of sunshine and snapshots of palm trees.

Call it what you will, The Hashtag Snowstorm, the latest Snowpocalypse or Snowtorious B.I.G. The weekend whiteout was a lifetime away from the blizzard of 1978, a world not just without social media but one devoid of endless Weather Channel warnings and the lifeline of mobile phones. Even the last two years have upended the way we receive information. We've moved from text to photos and videos taken on smart phones and we can't let go.

Kathy Tracy was in junior high school when that famous snowstorm hit Westhaven, Conn., 35 years ago. She still lives there today and some things haven't changed. Snow is still snow, and people still wait for the streets to be cleared, hoping there is enough food and toilet paper to get by.

"The roads were so bad that my father and I took a sled and walked two miles to the grocery store," says Tracy recalling the '78 storm that left as much as 27 inches of snow on the Northeast.

Getting updates of the '78 blizzard meant turning on the radio or watching evening news programs. This weekend, Tracy says she turned to Twitter and nonstop news coverage to stay informed. She also follows a meteorologist on Facebook and receives updates from CNN, The Wall Street Journal and other news outlets.

While Tracy talked with a reporter on the telephone on Sunday, she was still waiting for plow trucks to clear the three feet of snow the storm heaped on her neighborhood. But the information at the tips of her fingers made being stuck at home somewhat more tolerable.

"I guess what's better is that you are not sitting here waiting for the 6 o'clock news, waiting to find out what's going on," she says.

Still, no matter what century you live in, there are few cures for cabin fever.

"You still have to deal with waiting for the plow," Tracy says.

As people across the Northeast awaited plow trucks, looked for flights to resume or simply tried to kill time as the storm passed, they plucked away on their smartphones and tablet computers to document just about every inch of the snowfall. On Facebook, mentions of the word snow jumped 15-fold from earlier in the week, the company says, though it did not give specific numbers. On Sunday, one of the most-used terms in status updates was "no school tomorrow" as students rejoiced and parents shared updates with one another.

On Instagram, people used the hashtag "Nemo" (the Weather Channel's unofficial name for the storm) 583,641 times in describing their photos as of Sunday afternoon according to Venueseen, a company that helps businesses track marketing campaigns on Instagram. The Facebook-owned photo-sharing site is where Witz posted a photo that his sister sent him from Hamden, Conn., one of the hardest-hit areas with 40 feet of snow.

"I like Instagram because it gives you a more personal, immediate sense of peoples' experiences in real time," he says. "I'm one of the weird few people who actually enjoy seeing what people in the world are eating and drinking."

It's easy to be nostalgic about how much things have changed since the blizzard of '78 when it comes to the speed of information and how it's consumed. But the changes continue.

"What really struck me this time around, and with (Superstorm) Sandy too, is not so much that people were sharing information, but that they were sharing photos and video," says Steve Jones, a professor who studies online culture and communications at the University of Illinois at Chicago. "You get a different perspective than you could from just words."

Indeed, says Ranvir Gujral, the co-founder of Chute, a San Francisco startup that helps companies put user-generated content on their websites and mobile apps, "we are in the midst of a visual revolution."

The San Francisco company worked with NBC to launch Stormgrams, a site where people can share Instagram photos of the storm using a common hashtag. The photos are organized by location, laid out on a "heat map" that paints the most actively sharing states red.

Countless mobile apps encourage photo-taking, Gujral says, adding that a big reason there is so much thirst online for the endless stream of photos is because there has never been a bigger supply of it.

So what's lost in this endless stream of snow-updates, Instagram photos and Facebook news Serendipity, Jones says. Running into people and sharing a moment -offline- while events are unfolding.