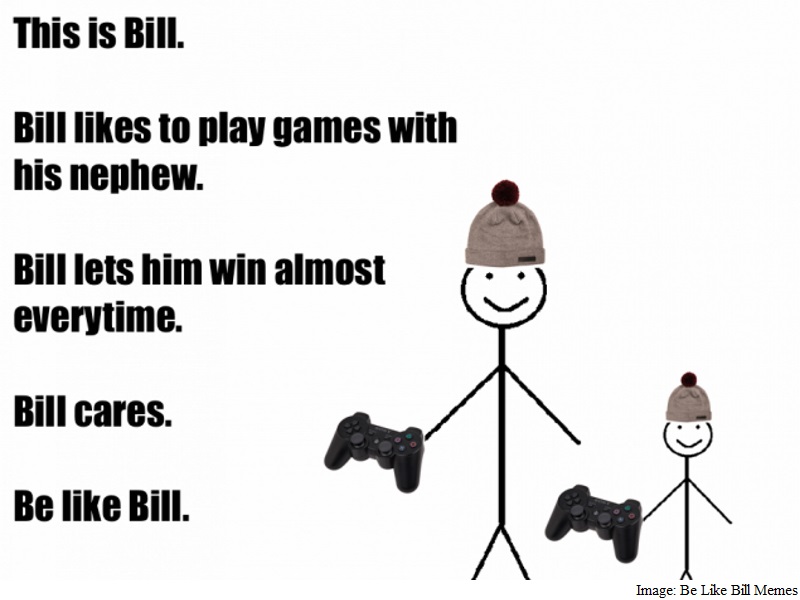 Bill does not forward chain emails. He does not take duck-faced selfies or click into schemes from Nigerian princes. He certainly doesn't play Candy Crush, Instagram his lattes or post vague, passive-aggressive Facebook statuses.

What Bill does do is instruct an audience of millions on some of the blunt details of social media etiquette: how to "share" and "connect" without alienating half your friends. Since Jan. 7, his stick-figured visage has attracted an audience of more than 1 million on an English-language Facebook fanpage, as well as fellow audiences in Spanish, Italian, Malaysian and Arabic. Whatever the language, the message is the same: "This is Bill. Bill does (blank). Be like him."

"It's hard to put a finger on what exactly makes a good meme," said Debabrata Nath, one of two men behind Bill's most popular English-language Facebook page. "(But) we feel it has to be something that doesn't take itself too seriously, is simple to understand and at the same time can make people relate." 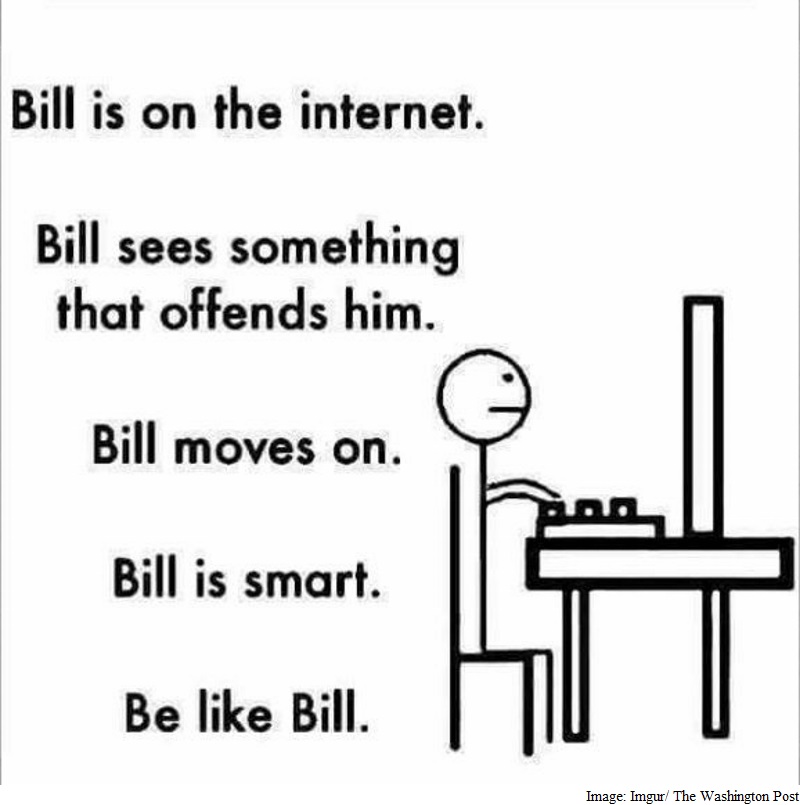 By that standard, Bill may just be the best Internet meme of all time: After all, there are few things quite so relatable, so fundamentally human, as policing other people's faults, especially online.

"This is Bill," reads one meme, shared by 68,000 people. "Bill knows that if he doesn't click like, or say amen, people won't die, orphaned children won't get cancer and his luck won't be good or bad."

"This is Bill," reads another. "Bill doesn't reshare his memories from 7 years ago."

Bill's sudden elevation from aging message board repost to global phenomenon is largely the work of one man, Eugeniu Croitoru, a 23-year-old Moldovan expat who has long specialized in geek and gaming memes and lives in Milan. Bill had been popping in and out of forums for months, and his Italian avatar - "Sii Come Bill" - was blowing up in Italy.

So Croitoru, the proprietor of the popular gaming site Videogamemes, slapped Bill with a joke about "Star Wars" spoilers and floated it by the Videogamemes community. The reaction was so immediate that Croitoru started a separate page for Bill and enlisted his friend Nath to help run the page, the two of them soon churning out a stream of criticisms on everything from vague-posting to gym selfies.

There are few among us, of course, who haven't at some point been annoyed by posts just like these: According to a 2013 poll by the search engine Bing, 40 percent of surveyed adults were sick of boring Facebook statuses, and 25 percent said their friends posted too many selfies.

But attempts to police such behaviors can easily go too far, as the case of Bill makes very clear. In the weeks since he achieved worldwide virality, Bill has also attracted a large contingent of haters who fault his smarmy tone and his lack of self-awareness. (Posting memes about other people's posting habits seems like a poor way to make a point.) 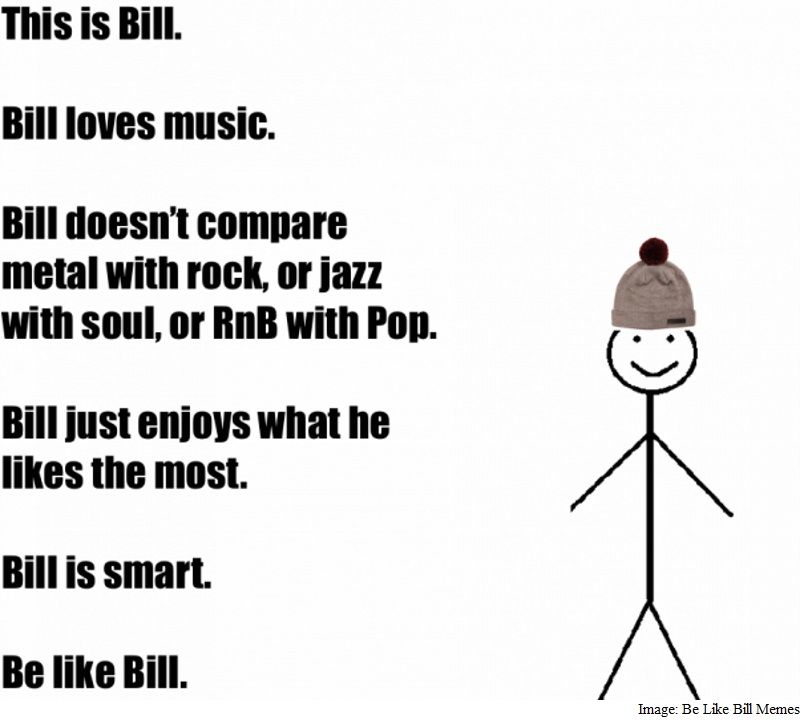 On top of that, while groups such as Croitoru and Nath's were initially Bill's gatekeepers, the meme's template is simple enough that anyone can, and is, editing it. As a result, the Internet hordes have turned the meme to more political purposes: arguments on why all Muslims should get special security screenings at airports, PC culture be damned, and rants against "man-hating" feminists.

Not coincidentally, that is how Bill began, six years before he came to Croitoru's attention: as a geek-forum shorthand for mocking the "outraged" and "politically correct," frequently social progressives.

There's a gulf between young Bill and contemporary Bill, of course; among other things, he has widened the scope of his derision. Where Bill once shut down feminists and "fatties," he's now devoted to passive-aggressively shaming anyone who fails to adhere to his particular rules of etiquette.

On one hand, that's a practice as old as time: Shame has always been the way societies enforce their particular social norms. And yet, Bill - a character incubated in geek forums, and propagated by a series of teenage and 20-something men - seems like the wrong guy to dictate who should do what online, and in what way, and how often. 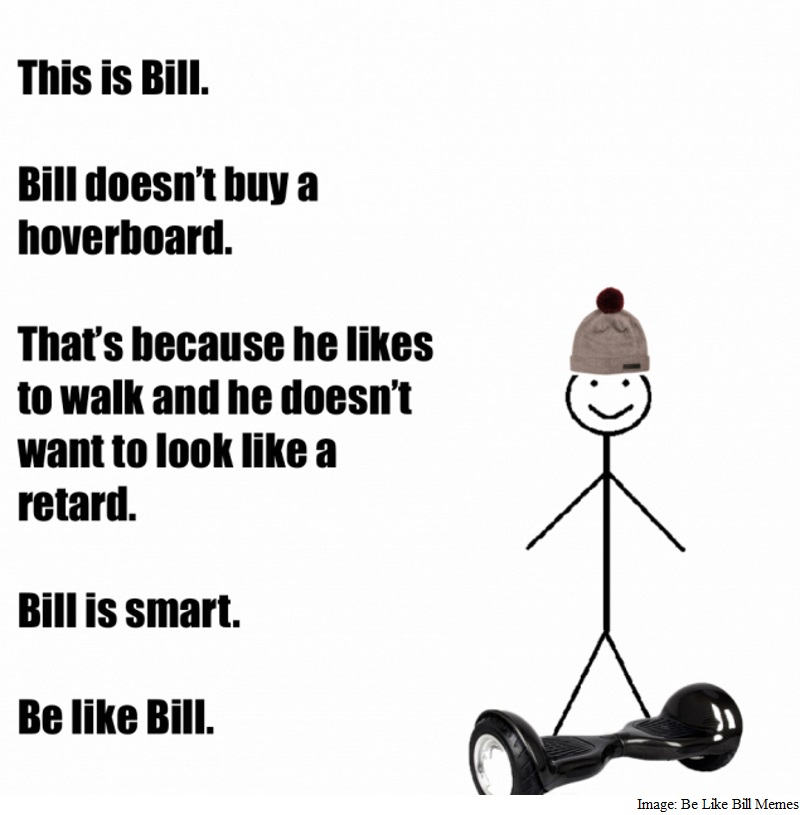 "The claim that the Bill figure is not political is dissemblance," sums up Janet Sayers, a professor at New Zealand's Massey University who has researched political discourse on the Internet. "It is a replication, perhaps even a hyper-replication, of social life" - which is itself strict in its rules, brutal in its judgments and biased in the way both are applied.

Nath, the co-creator of the Be Like Bill Facebook page, really doesn't want people to read too far into all this. Yes, he acknowledges, some Bill fans have taken the meme to dictatorial "extremes" that he and Croitoru don't agree with. Yes, he says, even Bill's tamest admonishments have outraged some readers who don't want a stick figure policing them.

But in the free memeconomy, Nath insists, only the best memes rise to the top -- and sure enough, offshoots of the meme that subvert Bill seem to be getting more shares and posts on Facebook now. One popular version shows a bloody stick figure Photoshopped onto a movie poster: "This is Uma Thurman," it reads. "She killed Bill. Be like Uma."

Alas, Be Like Uma has yet to inspire any fan pages, brand messages or Urdu-language derivatives. It appears that advocating for open expression and exchange on Facebook is slightly less viral than shaming it. And in that regard, at least, Bill may prove sadly significant.

"He is a bit of Internet ephemera, and will probably be over soon," Sayers said. "But I am a great believer that these bits of ephemera are very interesting and a sort of bellwether of social attitudes."