Twitter Power Search: How to Find Old Tweets From Your Timeline

Twitter is a great social network to express yourself, but attention spans are quite short on the social network. If someone tweets an interesting link today and you try to find it a fortnight later, you might hit a roadblock. Sifting through your timeline for that tweet is nearly impossible if you follow a few hyperactive Twitter accounts. If you can't find an old tweet, don't give up before you try these tools.

Update: Twitter has now indexed all public tweets posted on the social network and unveiled a much-improved search function. Twitter's search tool now shows much better results than it used to. We tried the updated Twitter search and found that it is much better. But some tweets that show up in third-party search clients still don't appear in Twitter's own search function.

Snapbird
We found that the best way to search old tweets on Twitter is through Snapbird. Although it requests access to your Twitter profile, it has several advanced controls that let you fine-tune your search queries. You can search timelines or favourites of other accounts, tweets mentioning you, your direct messages and your followers' tweets. All this makes it much easier to find tweets. We found that Snapbird was able to find tweets that most other tools, including Twitter's advanced search, could not. Here are some ways we found Snapbird useful:

1) Suppose you wanted to find a tweet someone else had favourited, but don't remember the details. You know that it was about (for example) Arsenal. Go to Snapbird, and select "Someone's favourites" in the drop down menu. Now type the Twitter handle of the person and the word you remember (Arsenal in our case) from that tweet, and then click "Find It".

2) What if someone had mentioned you in a tweet last year, and you needed some detail which was shared in that tweet. Sorting through a whole year of mentions would be difficult. Instead, in the same drop down menu, as the previous example, select "Tweets mentioning" and enter your search term. We looked for tweets mentioning @ndtvgadgets that contained the word "launch" and found a lot more tweets using Snapbird than Twitter's advanced search - a very handy way of getting up to date with all the new devices that have been launched.

These are just two examples - as we wrote above, there are a lot of options that Snapbird lets you use to fine tune searches. Note that Twitter imposes a 3,200-tweet limit on searches, so high activity accounts might not find this too useful for very old tweets. 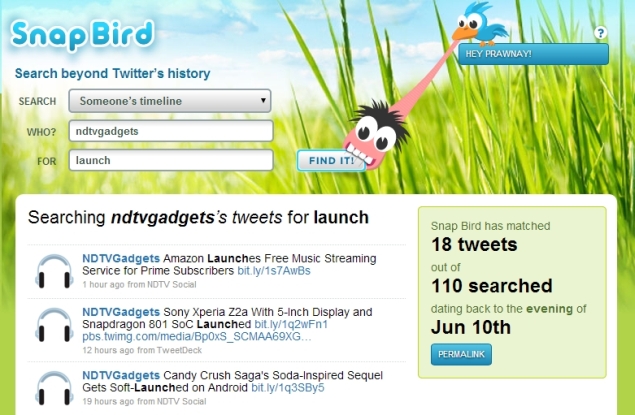 Topsy
Snapbird is great, but if you aren't comfortable with letting a third-party service access your Twitter account, you can try Topsy. Topsy's results are more accurate when compared to Twitter's advanced search and we found it particularly useful when we remembered the exact words used in a tweet. It isn't useful when you remember that someone had retweeted or favourited a tweet but not the contents of the tweet itself. Here is how we used Topsy:

1) Head to the site and click the Tweets tab above the search bar. Now key in your search query. We tried "Launch Center Pro 60% off".

2) Topsy will show you several tweets, which you can sort by relevance or time. These options are available in a drop down menu next to the search bar. For our query, we found three tweets from six months ago, which were the ones we were looking for. Since you don't have as many filtering options as Snapbird, more generic terms like Launch are less useful.

3) You can also filter search results by language and time (tweets from the past 30 days, etc.). These options are in the left sidebar.

You can search for everything from tweets with particular words, hashtags to tweets from a particular account that mention another account. This is how to use it:

1) Enter the search term you remember and you'll see the results. This method isn't perfect. In our tests, we found that it couldn't locate quite a few tweets in spite of us entering multiple search terms.

2) In the results page, Twitter shows Top Tweets by default. Click the All button next to it to see more results. 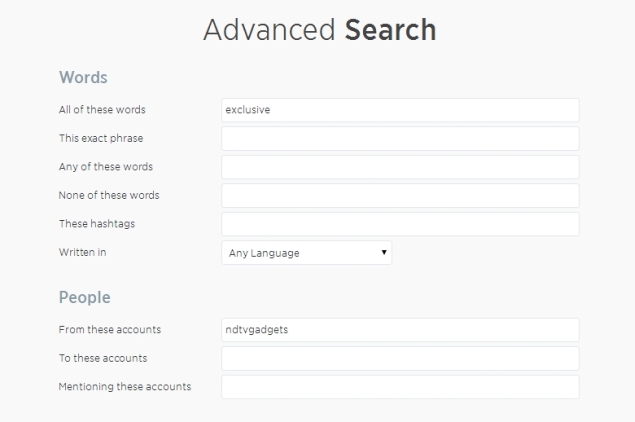 If all else fails (or you're looking for something that goes beyond the 3,200 tweet limit), remember that you can always download all of your tweets from Twitter. Simply hit the gear icon and click Settings. Now scroll down and click the Request your archive button. Twitter will send you an email when the archive is ready. The archive comes in a csv format, which you can open in Excel, which you can then search for keywords.

Found any better tools to sift through the endless chatter on your timeline? Let us know in the comment section below. If you want to read more of our tutorials, click here.