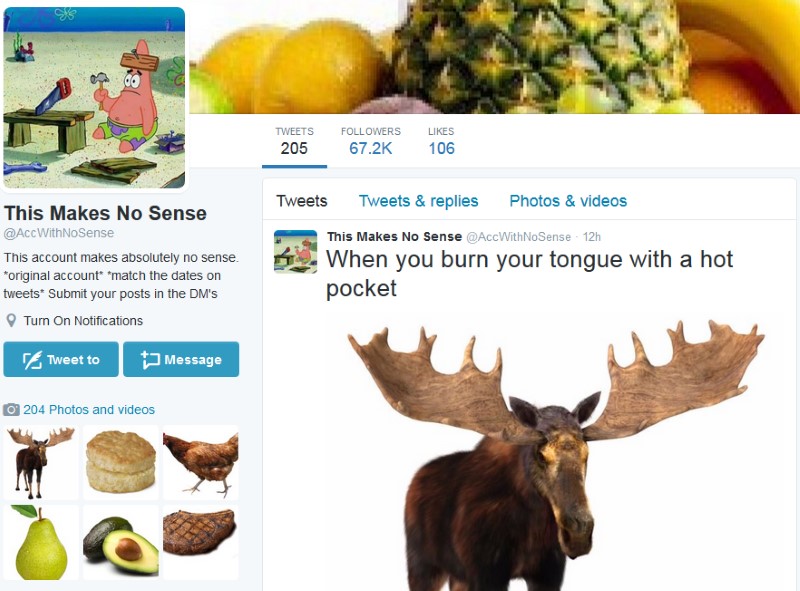 This story makes no sense. Let's get that out up top. It is a tale of social media vapidity, viral marketing and unabashed plagiarism run utterly amok.

On February 8, for reasons unknown to us, there began a sudden explosion of Twitter accounts that all did the exact same thing: pair a random stock image from the site Feelgrafix.com with an unrelated bit of teen-speak. By the accounts' own admissions, there's nothing novel, clever or even intelligent going on here; they all have names like "NoSensePosts" and "No Sense Made." But they've also racked up tens - even hundreds - of thousands of followers, sometimes in the span of just a few days.

"Nonsensical image-caption juxtapositions are the new hot meme amongst original thinkers on Twitter dot com," bemoaned Paolo Ordoveza, the viral debunker who tweets as @PicPedant and first noticed the trend in mid-February. By then, some two dozen accounts had cropped up. There are now just over 30.

It's difficult to pin down exactly who started the "No Sense" wave and how these accounts are related to one another. (Judging by the timing of their first tweets, a number are owned by the same person.) But the phenomenon does open a window on the weird and vaguely scammy world of "social influencer" marketing - informal networks of inane social media accounts that RT and repost each other to massive popularity.

In a 2014 story for Buzzfeed, Ryan Broderick explains the process this way: First, entrepreneurs (often teens) start up accounts on generically relatable topics, like "things girls say" or "sex facts of life." They then coordinate with each other to boost their follower accounts, usually by trading retweets. Once an account has enough followers, the owner can charge hundreds of dollars to run an ad on it -- and thousands more to sell it off.

As a result, these networks tend to experience high turnover and plagiarism rates, alike: As soon as someone launches a meme like "it makes no sense," it's destined to be copied dozens of times. (There's no honor among thieves, either. Not only do these accounts lift photos from the dubiously sourced Feel Grafix, which appears to be based in Russia, but they also lift identical jokes about pictures of crayons or cucumbers directly from each other.)

@ITweetNoSense, which has accrued nearly 86,000 followers in less than two weeks, appears to belong to the same promotion network as @SweetSabrinabae, @LiftMotivate and @FltConfessions - which may explain its speedy popularity.

@ThisAccountMNS, meanwhile, seems to belong to a much more complex network. Whoever owns that account (he or she didn't answer my emails, alas) also owns a companion YouTube channel and Instagram account, which may have started the meme before it moved over to Twitter.

Their email address has been used to register a website called FuriousFollowers.com. As its name suggests, the site vends followers for several social platforms, at least some of which are bots.

Surprisingly, however, the thousands of people who follow "no sense" accounts seem, for the most part, to be ... very real! According to the analytics tool Twitter Audit, all of the largest accounts are followed by humans. They tweet cry-laughing emoji back at @iDontGetlt. They tag their friends in their retweets. Frequently, they debate the genre's comedy: "I don't get it," one guy wrote, in response to a tweet by @NoSensePost.

Is this a self-aware parody of influence culture? A show of teenage nihilism? A cynical marketing trick? We can't say for certain - but either way, the kids love it.