"Kids my age are very occupied," said Owen, 15, a high school sophomore in Portland, Oregon. "We have school all day, and see our friends. We get home and we have to do our homework. Then we eat dinner and go to bed."

So some nights, mostly weekends, he snuggles under the covers with his laptop, the screen dimmed so his parents won't see, and watches tutorials on YouTube about how to create hip-hop beats with a drum machine.

"I talk to girls and stuff," he said, usually texting them on his cellphone. Other times he'll upload his music to SoundCloud and notify his Twitter followers.

Researchers have long contended that teenagers (along with their stressed-out parents) should get more sleep. According to a recent poll conducted by the National Sleep Foundation, more than half of 15- to 17-year-olds sleep about seven hours a night, 90 minutes less than the minimum recommendation. With myriad electronic ways to socialise, gossip and explore hobbies, tech-addicted teenagers are getting even fewer hours of sleep.

Some young people even have a term for it online: vamping, a reference to those other legendary creatures of the night. (Thanks, "Twilight" and "True Blood.") They document their all-nighters by posting selfies on Instagram from bed, with the hashtags #teen and #vamping.

Temitayo Fagbenle, a teenage "rookie reporter" for WNYC, filed a radio report in May about how her friends were sleep deprived because of social media.

"You want to seem as cool as possible so you will post something at 2 in the morning, to just be like, 'Oh, I'm part of this cool-kid group,'" one friend said, before Fagbenle added, "My friends and I see the same thing down our newsfeeds, posts about #breakingnight, also known as #notsleepingatall and #vamping."

(There are other, sexual definitions for vamping, but those are unrelated.)

The word has even gotten the attention of academics.

"Social media is about having agency over your own life, and vamping is one way to recapture that," said Alice Marwick, an assistant professor at Fordham University who studies the Internet and society.

Danah Boyd, a scholar and senior researcher at Microsoft Research, who recently wrote the book "It's Complicated: The Social Lives of Networked Teens," offered two reasons for the phenomenon. First, teenagers have a desire to connect, and the solitude of night allows for intimate conversation. Second, they are reacting to overbooked schedules packed with sports, music lessons and homework that give them less free time to pursue personal interests. 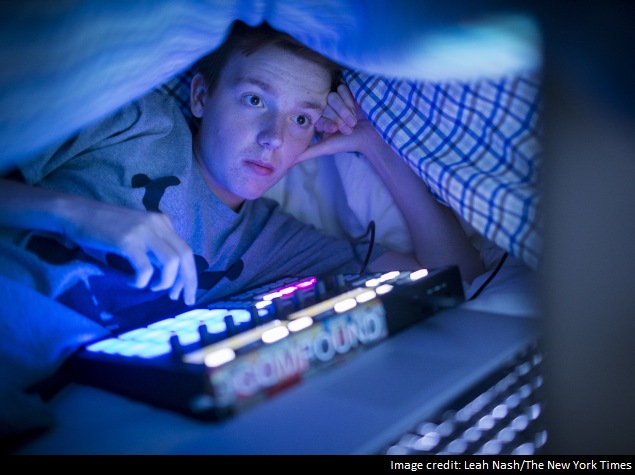 "Parents think they are doing good," Boyd said of teenagers' busy schedules. "But hanging out is where young people begin to understand social dynamics."

She added, "Because of the restrictions placed on them, very few interactions are unstructured until their parents go to bed."

There may be another reason, as timeless as high school dances and after-school clubs: peer pressure. A mother of a 13-year-old girl in Seattle (who requested anonymity so as not to embarrass her daughter) said her daughter has difficulty untethering from her social group after dark; she has often caught the girl chatting in the wee hours with at least four friends on Kik, a mobile messaging system.

"She'll go to bed and I'll check on her an hour later and she'll have her phone," the mother said.

"I say, 'How do you keep up? It's stressful,'" the mother added. "And she says, 'I know!'" But her daughter finds it wrenching to unplug after dark. "The phone beeps and they feel compelled to answer it," the mother said. "It's not like reading a book. The book wasn't pinging you every moment, saying, 'Read me! Read me!' You can close the book."

Some school officials have taken notice and are trying to help parents set boundaries.

James Shapiro, the middle-school director at the Berkeley Carroll School in New York, gives a talk to parents in which he offers tips, like keeping electronics out of the bedroom at night.

"When the bedroom door is closed, computers should be off and cellphones should not be in the bedroom," he said. "It is too tempting."

When eighth-graders from his school went on a trip to Grand Teton National Park, all smartphones were stored in a large tub.

"They were chirping vainly, like hyperactive grasshoppers," Shapiro said.

But even with limits, it is tough to patrol teenagers 24 hours a day. Jake Rosen-Birch, 15, a high school sophomore who lives in Washington, D.C., said he takes naps after school so he is wide-awake by midnight, often texting friends on his smartphone about concerts or favorite bands.

"I've been on Snapchat all night and not closed my eyes," he said, referring to the popular app where messages vanish after a few seconds. Other times he binge-watches shows on Netflix, most recently episodes of "Grey's Anatomy."

Does his mother get upset?

Owen's mother said she once got up in the middle of the night for a glass of water and noticed that her son's laptop was missing from the hallway bench. That was the first time she found her son in bed, the sheets pitched like a tent, with his laptop and some music equipment. She even bought Owen an old-style Timex clock so he wouldn't use his cellphone as an alarm.

"All parents are struggling with this," Owen's mother said.

But perhaps parents are partly to blame. Boyd, the researcher who studies Internet and society, said that a popular refrain from teenagers is that parents often don't follow their own advice.

"If we can't have it, why can you have it?" she said teenagers ask of their parents. "When you have kids put their cellphones in the drawer, parents should put them in, too."

Or maybe teenage behavior hasn't changed, whether it has a new name like vamping or not.

"I used to have a flashlight and I'd read Dickens late at night," said Shapiro, the school director. "I'd hear footsteps and turn the flashlight off."

He laughed, adding, "I was good at feigning being asleep."