Facebook's Zuckerberg at Crossroads in Connecting the Globe 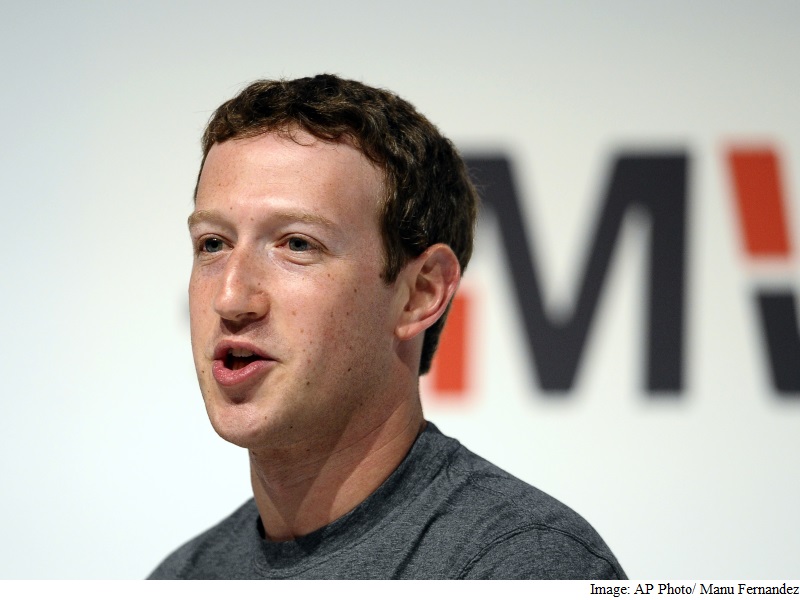 Facebook CEO Mark Zuckerberg likes to boast that his 3-year-old effort to bring the developing world online has reached millions of people in some of the world's poorest nations.

But a central element of his Internet.org campaign was controversial even before it was shut down in a key market this month. Indian regulators banned one of the pillars of the campaign, a service known as Free Basics, because it provided access only to certain pre-approved services - including Facebook - rather than the full Internet.

That leaves the social media mogul at a crossroads. Though he has vowed not to give up, Zuckerberg hasn't said whether he'll alter his approach. Facebook declined to make executives available for comment. Zuckerberg could shed light on his plans when he speaks Monday at Mobile World Congress, an annual industry event in Barcelona, Spain, where he has touted Internet.org in previous years.

"Everyone in the world should have access to the Internet," Zuckerberg wrote on Facebook this month, arguing that online connections can improve lives and fuel economic development.

To achieve that goal, Zuckerberg has high-flying dreams for someday providing Internet connections through a network of drones, satellites and lasers. But his near-term plan is simpler: Facebook works with wireless carriers in poorer nations to let people use streamlined versions of Facebook and certain other online services, without paying data charges.

While the drones may someday connect people in areas too remote for cables or cell towers, Free Basics is intended for people who live in areas with Internet service but still can't afford it.

A low-income resident of urban Manila, for example, can use Free Basics to view the Philippines' GMA News site. "He can be informed. He can research. He can read the news," Ederic Eder of GMA News said.

The program varies by country, in offerings and effectiveness.

In South Africa, for instance, Facebook partnered with the third-largest wireless carrier, Cell C. But Johannesburg resident Priscilla de Klerk said she couldn't get Free Basics to work on her phone.

"Cell C is much cheaper as far as everything else is concerned, but their free Facebook is not a reality," she said.

Last fall, Facebook announced a major expansion in Africa, where another regional carrier, Bharti Airtel, said it will offer Free Basics in 17 countries.

"They're getting a lot of traction in Africa," said Danson Njue, a Kenya-based telecom analyst with the Ovum research firm. Tech rivals Google and Microsoft also have programs to expand Internet access, he noted, but their approaches are content neutral and involve extending networks to underserved areas.

Facebook doesn't pay wireless companies for the cost of Free Basics. Carriers make money if new users eventually move to a paid data plan. Facebook also says it makes no money, as it doesn't show ads, though Zuckerberg has conceded it benefits from gaining users in the long run.

While the company hasn't released detailed usage figures, Facebook says Free Basics has brought more than 19 million people online for the first time. That counts any user who didn't have Internet access before, regardless of whether they're currently active.

On the Internet.org website, mixed in with videos about impoverished students using Free Basics to study and laborers starting small businesses, Facebook boasts more than 1 billion people "have access" to the service. That's the combined population of regions where it's available, not the number of users.

Free Basics is now in 36 countries. It was suspended last year in Egypt, on the anniversary of anti-government protests that were organized partly on Facebook. An earlier version of Free Basics, known as Facebook Zero, was shuttered three years ago in Chile, after authorities said Internet providers couldn't offer discounts for accessing some content but not others.

Free Basics enrolled more than 1 million Indians in its first year, according to Facebook's wireless partner, Reliance Communications. But critics, including many in the country's growing tech community, complained it was a predatory scheme: If low-income users couldn't afford anything besides Free Basics, opponents said, that meant Facebook was deciding which online services the nation's poor could use.

"The government should not allow big players to monopolize the Internet," said Manu Sharma, who runs a software development company in New Delhi.

Facebook responded last fall by announcing it would open Free Basics to any app that met its technical requirements for systems with limited capacity. Zuckerberg also changed the program's name to Free Basics, after critics complained "Internet.org" sounded like a nonprofit, when it's part of a for-profit company (the overall campaign is still called Internet.org).

But opponents still worry that Facebook could change requirements at any time, force competitors to pay higher rates to get into the program, or even block services that run afoul of powerful politicians.

"The fact that it could decide what apps could be hosted ... was a huge problem for me," said Basit Zaidi, a New Delhi attorney.

As Indian regulators began studying the issue, Facebook drew more resentment with a public-relations blitz that critics called heavy-handed and patronizing. The regulators effectively banned Free Basics after concluding Internet providers shouldn't be allowed to charge different rates for certain services, because that discriminates against other content.

US regulators have endorsed the concept of "net neutrality," which says all websites and apps should be treated equally by Internet providers. They're now studying whether "zero rating" programs, which offer some content for free, should be allowed. Net neutrality supporters are hoping India's decision will influence other nations.

Facebook has also launched a program that helps Internet providers offer reliable Wi-Fi service in underserved areas at affordable rates and without limits on content. The program's been limited to tests in a few countries.

The giant tech company could use its resources and clout with carriers to offer a similar wireless service, perhaps at limited speeds or volume, but without any restrictions on content, said Josh Levy of Access Now, a nonprofit that supports net neutrality. Zuckerberg has suggested in the past that such a service would be too expensive and difficult to offer.

Some Indians, meanwhile, say their country could have benefited from Free Basics.

"Ultimately, something is better than nothing, even if that something is flawed," said Uday Singh Tomar, a software engineer in New Delhi. "If a person is hungry and getting nothing, a free meal is good enough."